Despite having only seven shots on goal in the first and third periods combined, the Wolfpack made the most of their 10 shots on goal during the middle period by scoring three times, which included the game-winner and an insurance goal during a stretch of 6:45, to capture a 3-1 victory over the Celtics and repeat as DiCristina Cup champions.

Cheered on by the Wolfpack varsity squad, which captured the Kennedy Cup championship with a 4-0 victory over Benet Academy one week earlier. Both teams celebrated the victory on their home ice as they followed the junior varsity's title celebration with the raising of the two cups and posing for a picture of the combined program on a special weekend for Saint Ignatius, which also capped its most successful IHSA season in boys basketball on Friday by beating Simeon to finish third in Class 3A for its initial trophy.

"It's been a great year," Wolfpack coach Mike Rigitano said. "From day one, our motto has always been hard work and dedication. Credit to Providence, they're a phenomenal organization and a great club. They're on that trophy eight years in a row so it's been a nice rivalry over the last couple of years that we've built with them. They're always close games and they have a great coaching staff.

"We're trying to change things here at Ignatius and obviously you can see that with the back-to-back DiCristina Cup Championships. It was a phenomenal experience for varsity to win their first Kennedy Cup and us winning this and to have both trophies of the CCHL at Ignatius is a phenomenal feeling. It was a special moment to have the varsity team out there with us and their cup. I'm so proud of these kids. They dedicated their time and effort. It's a real special moment.”

In a classic case of making the most out of the least, the Wolfpack overcame a 9:00-opening stretch in which they were outshot by an 8-1 margin. The Celtics were unable to capitalize on their early dominance in shots on goal, and after the hosts gained some momentum by getting four of the last five shots before the first break, the two sides each had 10 shots during the middle period, with three of those going in for Saint Ignatius while Providence buried its lone goal for the evening.

Saint Ignatius took its first lead just 18 seconds into the second period when Drew Lannon got open in front and connected for his 17th goal, which was set up by Mick Gilbert’s tenth assist, and the fifth assist from Finn Gilner. But Providence countered just 2:04 later when Ethan Ganz put in an unassisted goal from close range to even things up. It was the 11th goal for Ganz, who assisted Finbar Harris's game-winner to cap the Celtics' 4-3 comeback win in three overtimes in the series' second contest.

"This is my first year with the club since I moved here from Boston," Lannon said. "Coming in, I was a little tentative since I really didn't know how it would be and how it would work out. But I was really impressed with the CCHL, it's really high-level competition. I think we had a really good season and all of the boys were working hard.

"I think we were a little slow coming out at the start, mainly because of the triple-overtime loss, since that took a lot out of us. I have to give a lot of thanks to our goalie, Ethan Laughlin, it was a really impressive showing by him. The first period didn't go our way, but we regrouped as a team at the end of the first period. Our coach told us what to do and what to work on and right off the bat it was the first shift in the second period and I slid a pass over to Mick Gilbert and he dropped one off right in the slot and I just fired one right in. The second goal was a big momentum shifter, it really fired the boys up. And capitalizing on power plays is something that we've been working for all year.

"This is a really good program that I walked into. Starting up with the leadership of Owen Ray and Eghan Ryan, our assistant captains, and Jack Druckman, I think they do a really good job of keeping everyone in check, whether it's in practices or games, and they make sure that things go as they need to go. It's a great day. We're a family and we even say it in the locker room that these are all my brothers and I'm going to have this memory for the rest of my life."

After neither side committed a penalty during the opening period, the Celtics were whistled for the first of the game with 10:07 left in the second. The Wolfpack capitalized on the interference call just over a minute later to score what would turn out to be the eventual game-winner. With 9:01 left in the second, Lucas Joa sent in a pass to Owen Ray, who put in a short shot for his 25th goal while Joa was credited with his fifth assist. That was Saint Ignatius' 13th shot of the game, the lone time it would lead in that category.

Providence looked for the equalizer and fired off a series of good attempts toward goalie Laughlin, who once again was at the top of his game after coming up big time and time again while facing 67 shots during the triple-overtime contest.

"They were definitely getting pucks to the net but not necessarily in quality chances," Laughlin said. "And we got one from Tiernan (Ryan) getting a great goal and (Drew) Lannon and (Owen) Ray burying ones in front, those were quality chances. Even though we had less shots, I still feel that we produced more as an offense than they did. We had a lead in game two at 3-1 and we weren't going to let that lead slip away today. Credit to the team in front of me, they played outstanding in the third period. Sitting back and letting them carry a puck into the zone, but still keeping them to the outside and getting the puck out, it was phenomenal. They limited the chances for sure in the third period.”

The Wolfpack made the most of their 15th shot of the evening when Tiernan Ryan scored his 24th goal after Jackson Bossert handed out his seventh assist with 2:16 left in the second period. That's how it remained heading into the final 15 minutes with Providence owning a 19-15 edge in shots but facing a two-goal deficit. Ryan led all players in shots on goal while most of the other Wolkpack players who scored goals or added assists also had multiple shots during the game.

Focusing more on defending and keeping possession throughout the final period, the Wolfpack only sent two more shots toward Providence goalie Justin Laakson. Meanwhile, the Celtics fired off nine more attempts to finish with a 28-17 advantage in shots on goal but weren't able to capitalize on a pair of power plays, which were the result of the only two penalties that the hosts made, with 12:00 left and the other with 5:55 remaining.

"We were very committed," Saint Ignatius senior Tripp Condon said. "We've been working since June with summer programs and then three days a week. We went through a lot of adversity early on in the season. This is a different team from last year, we weren't the flashiest players but worked hard and skated hard and we just wanted it more than them. The thing I liked most about this group is that we're so loose, that we just had so much fun with each other. Everyone is so excited since everyone is just friends with each other. It's just a great group of guys. It was a great group to go out with.”

Laughlin again halted everything that came his way during the two power plays and the subsequent stretches where the teams were at full strength. The Celtics tried to put something together to create late drama but the Wolfpack limited their chances and the two-goal advantage proved to be decisive as Saint Ignatius put the finishing touches on its well-played victory to deny Providence of recapturing the DiCristina Cup, which it had won eight-straight times before the Wolfpack snapped that streak a year ago.

"We were really all over them in the first 10-15 minutes of the game," Celtics coach Rick Clement said. "But when you don't come out of that on the scoreboard, sometimes it comes back to haunt you, and tonight it did. Credit to them and their goaltending, he did a great job tonight. But you can't be up 10-1 in shots 10 minutes into the game and not be up on the scoreboard. And they jumped on their opportunities and put them behind us and we just didn't do that tonight.

"And that kind of speaks to the whole series, really over the last two years that we've played these guys. We're pretty even up and down the lineup last year and this year, as is evidenced by the series with two one-goal games coming into today and it was a 3-1 final here, but it was a lot tighter than it looked like and credit to them. They've done a great job of developing players and their coaching staff is a bunch of great guys. We just didn't capitalize on our opportunities today. We felt that if we got in on the forechecking and created some turnovers that we'd have those chances. We made those chances, but we just didn't make them pay for it.

"We have a goalie that had 10 shutouts, which led the Catholic League in shutouts. We were one point out of first place in the final standings coming into the playoffs. And outside of this, we won a tournament in Toledo that we've been trying to win for five years and we were able to come home with the victory there. So there were a lot of positives that came out of this. We're a young team with a few upperclassmen, but the majority of these players are young, freshmen and sophomores, and they have a big future ahead of them at Providence. This is about giving them the opportunity to go three games deep in a series and get the experience of playoff hockey and learn what it is to win, and unfortunately sometimes, learn what it is to lose, and not feeling good about losing and working a little bit harder in the summer and getting ready for next season." 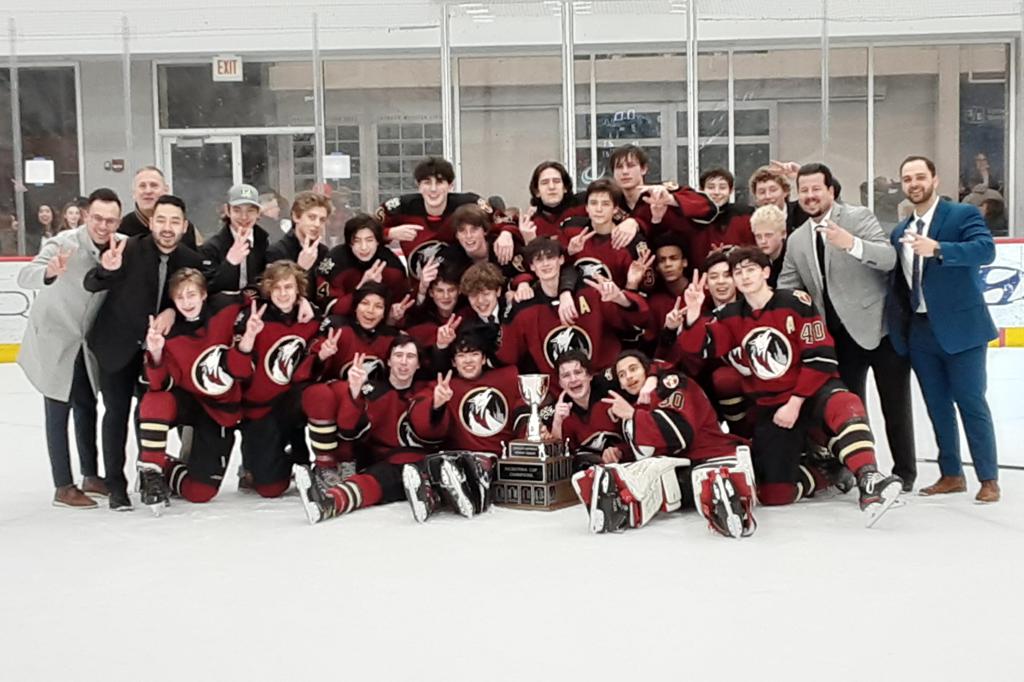