The Wolfpack stormed to a 4-0 victory over Benet on Saturday to sweep the series and claim the school’s first Kennedy Cup title. St. Ignatius rolled to the championship without losing a game (6-0) after finishing 18-2 in regular-season play to win the CCHL crown ahead of Benet, which had won the past two Kennedy Cups.

“We needed to get over that line,” Wolfpack coach Matt Smith said. “This was our fourth time in the finals in the past six years and it had to be done. And thankfully it was. We had the right group and enough scar tissue built up that there was just one outcome we were willing to accept. And that was winning this for the first time in school history.”

Sebastian Wigfield was awarded the Kennedy Cup MVP after earning the shutout. Corbin Klein scored twice and Bobby Eber and Charlie Reif each added a pair of assists for the Wolfpack, who lost 6-5 in overtime to Benet in the deciding game of last year’s Cup final.

“Everything was leading up to this point and I’m just glad we pulled through, honestly,” Wigfield said.

They did more than pull through — the Wolfpack took control of a game that had been evenly played through two periods. Each team had 19 shots and St. Ignatius clung to a 1-0 lead entering the final period.

The Wolfpack nabbed the lead early in the second period for the game’s first goal. Corbin Klein deflected a high shot from Raymond Owens to give Saint Ignatius a 1-0 lead just 11 seconds into the period.

Klein and Owens had two other good scoring chances later in the period but couldn’t add to the lead. A neutral zone steal by Owens resulted in a 2-on-0 break. Owens carried down the right side before slipping the puck to Klein, whose point-blank shot was turned aside by Benet goalie Will Janus midway through the period.

Then with less than 30 seconds on the clock, Owens shot wide on a 2-on-1 with Klein, who passed it to Owens between faceoff circles for a mini-breakaway.

A scoreless first period wasn’t without quality scoring chances, especially for the Redwings. In fact, Benet had four of them in the final 3:30 alone but couldn’t get one past Wigfield.

Christiano DiBenedetto provided two of them just a minute apart, only to be thwarted by Wigfield both times. The first came on a rebound when Wigfield stoned DiBenedetto to the right of the cage.

“I thought we outplayed them in the first period. We just didn’t get any rewards for it,” Benet coach Jon Grzbek said. “Good job by (Wigfield), good job by their ‘D’. And after their first goal I thought the rest of the (second) period was pretty even.”

Wigfield did himself one better on the next DiBenedetto opportunity, using his quick stick to poke check the puck away before DiBenedetto could make his move in front.

“They’ve had plays like that before where I’ve sat back and took it,” Wigfield said. “They’ve got skilled guys; they’re going to move the puck around on me so I figured I’d take the action before they even get the chance.”

The Wolfpack added to their lead in the third, again scoring in the opening minutes. Connor Kennedy scored into an open net after Joey Velarde scooped up a rebound and backhanded a pass to Kennedy in front of the fallen Janus. Reif took the original shot as the Wolfpack took a 2-0 lead at 15:04.

“When they got that second goal, it kind of took the wind out of our sails a little bit,” Grzbek said.

Paul O’Grady made it 3-0 with a power-play goal at 8:23, getting assists from Reif and John Paul Koehl. O’Grady snapped the puck into goal, taking a Reif feed from the behind the net.

The Wolfpack added an empty-net goal from Klein with 1:55 to complete the scoring and from there, it was all about keeping the Redwings away from Wigfield.

“Once we got to that point in the third we were all just trying to get that shutout for Wiggy,” Eber said. “He deserves it. (Three) year varsity goalie — he deserves it.”

The Cup-clinching victory came just two days after the Wolfpack suffered a 3-2 overtime loss to Stevenson in the state quarterfinals. Having a day off between games allowed the players to put that defeat behind them and return their focus to Benet, which also suffered a quarterfinal loss in the state tournament, falling 6-0 to New Trier Green on Wednesday.

“The morning after that game was a little rough but today it was just about getting the job done,” Wigfield said. “We were just ready to go.”

Smith applauded his boys’ resilience and performance against Benet, which came only a few days after the Wolfpack lost a state quarterfinal game to Stevenson.

“That loss may have sharpened the knife going into Saturday’s game against Benet, knowing we had one more bite at this thing together,” Smith said. “We were on a bit of a mission.”

GAME NOTES:
Benet
The Redwings bid farewell to a senior group that saw the program win two Kennedy Cups in their time with the program. Benet finished second in CCHL regular-season play with a 17-3-0 record and went 35-14-0 overall.
Players like Christiano DiBenedetto, captain Tommy Budreck, and Ryan Farago make up a senior core of seven forwards, one defenseman, and one goaltender that also includes Ryan Grzbek, Giovanni Maselli, Ben Alagna, Gabe Szopinski, Curtis Sperling, and Patrick Sullivan.
“When that group came in, we had three teams and some of them have been seen four years of varsity hockey. They took Benet hockey to a new level, they really did, and some of these kids I’ve had since they were squirts.
“I’ve watched them grow into young men and they have represented the program well.”
Grzbek also tipped his hat to the Wolfpack after their history-making win.
“I’m sorry we lost it but Saint Ignatius is a really good team,” he said. “They’re a good program, they were first in the league, it’s their first Cup — I remember what that was like and they’ll cherish it.”
Saint Ignatius
A group of sixteen seniors keyed this year’s Kennedy Cup-winning team, which finished with a record of 39-11-2 and finished atop the regular-season CCHL standings at 18-2-0.
Those seniors are defensemen Joey Giunta, Bobby Eber, Myles Mobarek, John Paul Koehl, and Colin Mulcahy; forwards Raymond Owens, Tyler Pan, Paul O’Grady, Joey Velarde, Connor Kennedy, Will Karnick, Paddy McDonough, Alex Lezotte, and Aidan Dooley; and goaltenders Sebastian Wigfield and Cash Volpe.
Owens, Pan, and Lezotte played their first seasons for Saint Ignatius this year, while Kennedy and Mobarek returned to the varsity fold this year.
“Everybody kind of came in for a reason,” Smith said. “We had some new entrants so it took a little time to take shape, and we were really happy it took shape the way we envisioned and wanted. That’s not guaranteed so it was nice to see the way it played out .
“It’s a credit to the connection that this group had together. They were the tightest group that we’ve had here.” 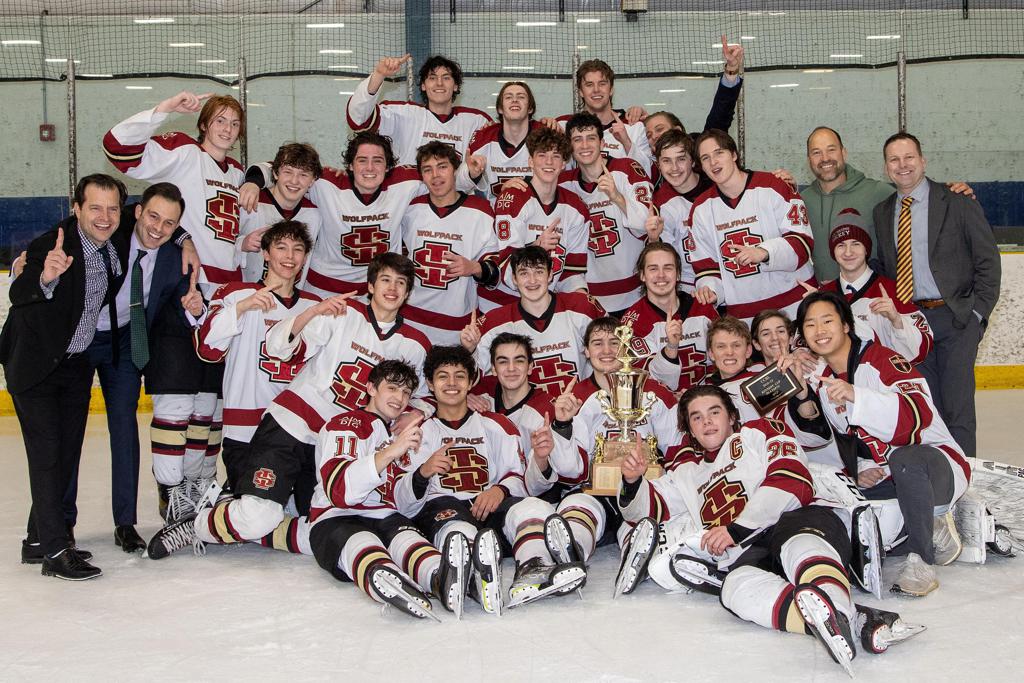 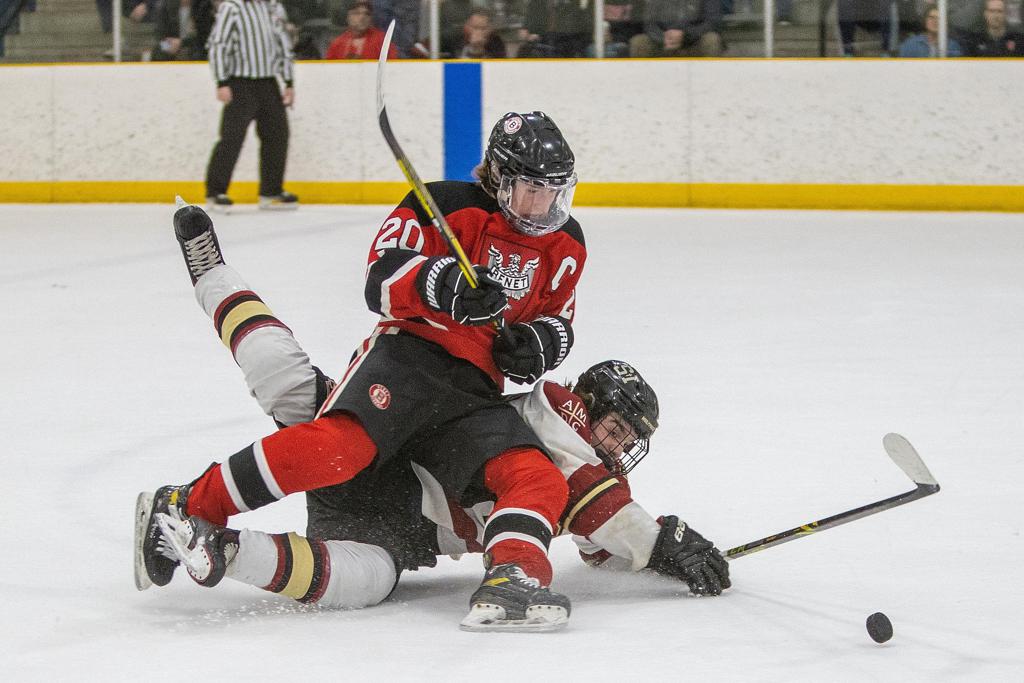 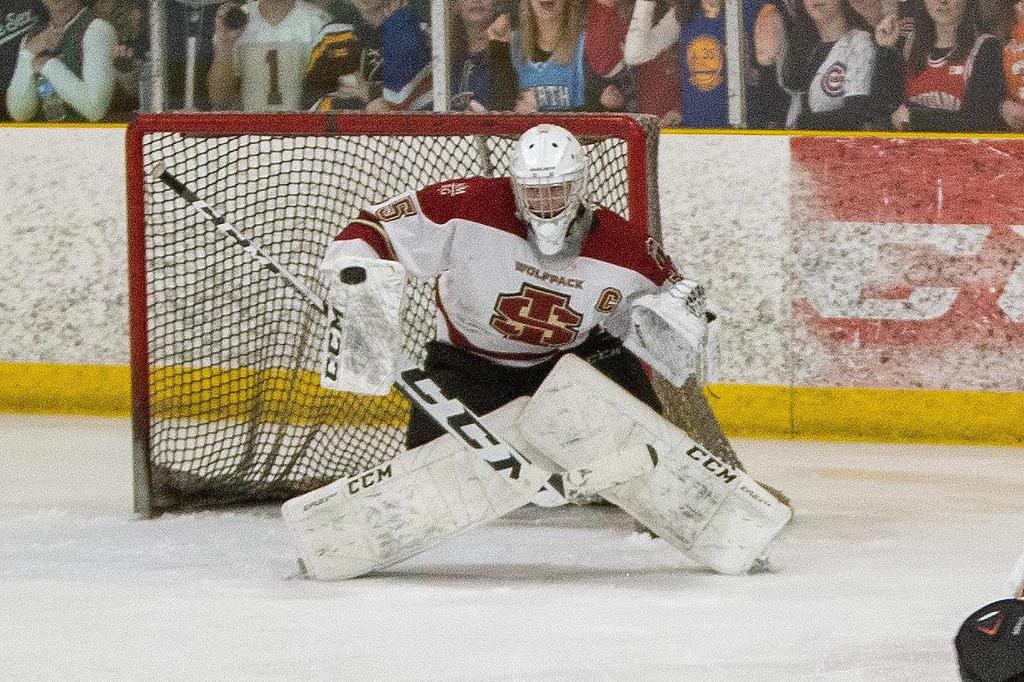