Carmel's 3rd period too much for St. Rita

VERNON HILLS -- How do players respond when they’re doing everything their coach asks them to do but can’t seem to get a puck past a hot goaltender?

That’s the question Carmel’s players had to answer in their series against St. Rita and its CCHL all-star goaltender, Mike Menard, who held Carmel to a single goal spanning six periods during their best-of-three series.

Through two periods of Saturday’s third and deciding game, Menard and the Mustangs led 1-0 on the Corsairs home ice. Carmel had to make a choice between two options:

“There’s a difference between panic and desperation; desperation is good and panic isn’t,” Carmel coach Paul Eberhardt said. “In that situation you can start squeezing the sticks too tight but that’s where you have to just play. That’s all. Just play. I’m proud of the kids because they stuck to it, and didn’t lose their composure.”

St. Rita led 1-0 on a first-period goal from Trent Scianna, his second goal of the series. Scianna scooped up a loose puck in the neutral zone and went in alone on net to score with 7:01 remaining in the period.

A scoreless second period ensued and Carmel led 26-13 in shots heading into the intermission. Tension and frustration could have easily set in inside the Carmel locker room, but players kept their resolve.

“We stayed with it. We kept going with no let-down,” Carmel’s Leon Swiatkowski said. “We never got down and thought ‘it’s not working’. We came together and believed we were going to get this.”

Jack Renn finally broke the ice for Carmel to tie the game at the 10:10 mark, on assists from Kyler Gornick and Nolan Herubin. Herubin fed Bryce Stensrud at the net less than two minutes later and just like that, Carmel had its first lead since Game 1.

Herubin scored a short-handed goal with 5:47 left in the game, on a feed up the gut from Stensrud that sent him in alone on net to make it 3-1.

St. Rita wasn’t done. The Mustangs cut their deficit to 3-2 just 11 seconds after Herubin’s goal, on a goal from Luke Maher and an assist from Joe Kostelc. The game’s final five minutes featured high-end urgency from St. Rita until the Mustangs pulled Menard in the waning minutes.

Stensrud put things out of reach with 25 seconds left in the game, weaving his way through and around three Mustangs through the neutral zone and burying an empty-netter to finalize the score at 4-2.

Afterwards, there were some well-deserved tips of the hat for the series Menard played between the pipes for St. Rita.

“He played amazing. He stood on his head for them,” Swiatkowski said. “He’s been good the whole series. We put up (34) shots on him and we couldn’t score until the third period. We just had to stick to what we believed in, keep going, and one is going to hit the back of the net when you have thirty-plus shots. Just keep going and get to those dirty goals, get to the front of the net where you’re going to get that second chance.”

“Herubin has had over ten short-handed goals this year,” Eberhardt said. “The penalty kill is when you really see Stensrud and Herubin really control play because they’re such a threat.”

Herubin liked the way his side responded during six periods of hockey in the series when it was difficult to scratch out a goal.

“You can’t get in your own heads when tensions are high like that,” Herubin said. “I just loved to see everyone winning battles and winning races today. You have to love to see that.”

Carmel’s 4-2 win also got a monkey off the program’s back.

“We hadn’t won a playoff series since we joined the league four or five years ago,” Eberhardt said. “I really loved their grit today. We’ve been trying to get guys to move the puck, and to use and believe in each other, and we did that.

“We’re led by (Herubin) and (Stensrud) and Leon (Swiatkowski) has been such a rock on defense, and I thought Gornick stood up and played a great game today. He’s big and powerful and he’s a defenseman, and we use him in front of the net and that’s where he helped us get that first goal.”

No. 5-seed St. Rita finished regular-season play in the CCHL in fifth place with a record of 11-8-0 plus an overtime loss, while No. 4-seeded Carmel finished fourth with a 12-5-1 record plus 2 OT losses.

Carmel next plays top-seeded St. Ignatius (18-2-0 in CCHL play) on Thursday in a Kennedy Cup semifinal series. The winner there takes on the winner between No. 2 Benet and No. 6 Fenwick in the Cup finals.

Carmel knows what it faces in St. Ignatius come Thursday at 7:50 at Fifth Third Arena in Chicago.

“They’re an outstanding team, one of the top five in the state, and they have another outstanding goalie (Sebastian Wigfield),” Eberhardt said. “We’ve played everybody two or three times and it’s been a competitive, hard grind for our guys but they’re ready and they’re playing the right way.” 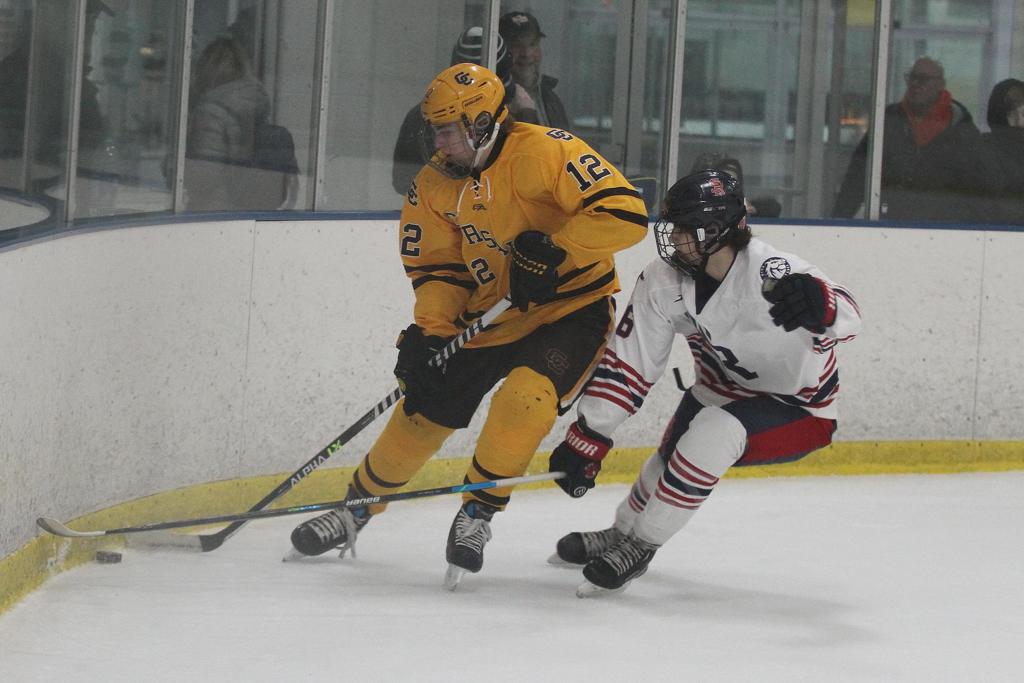 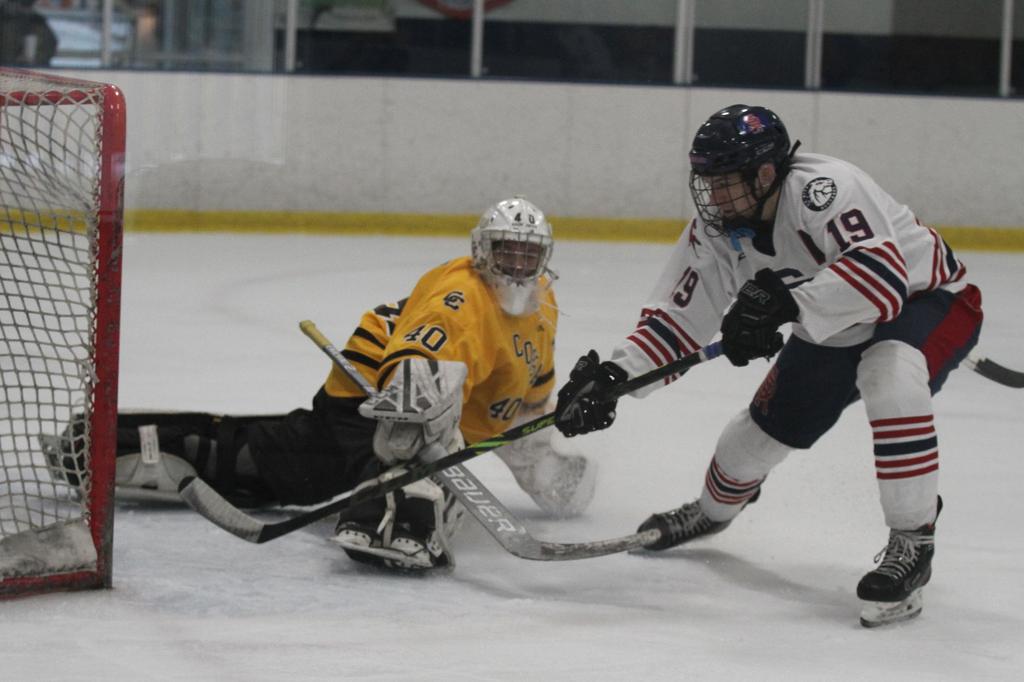 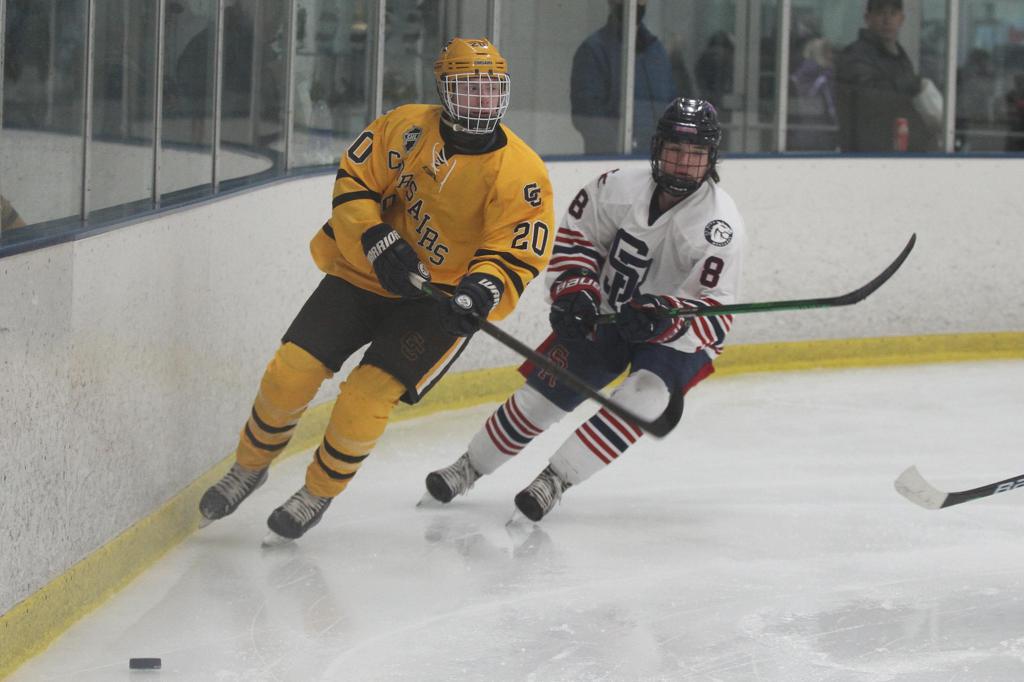 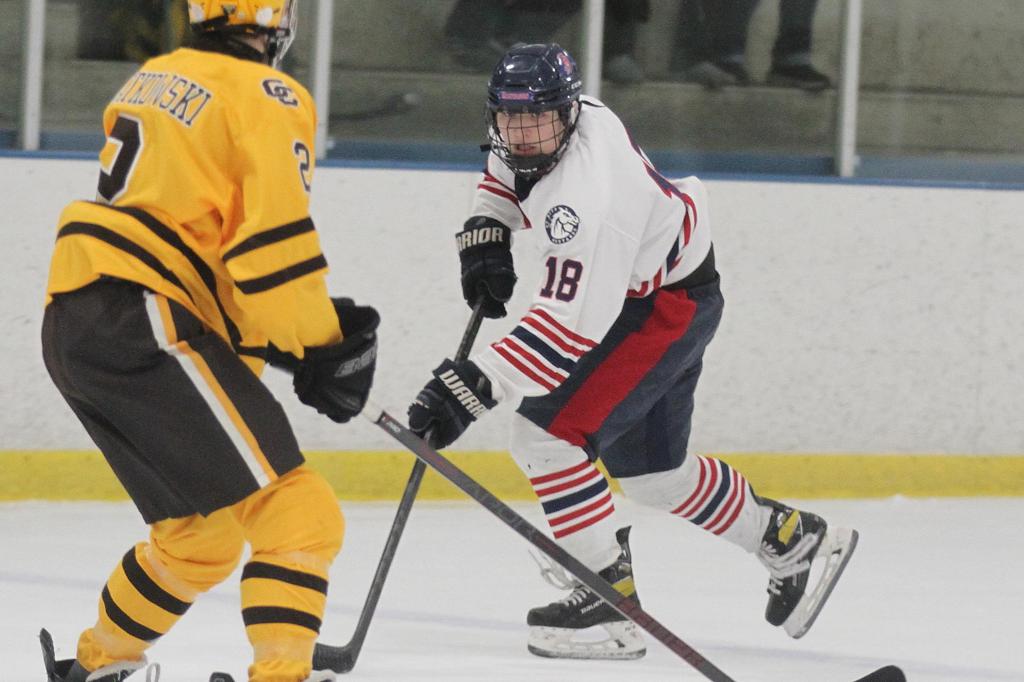 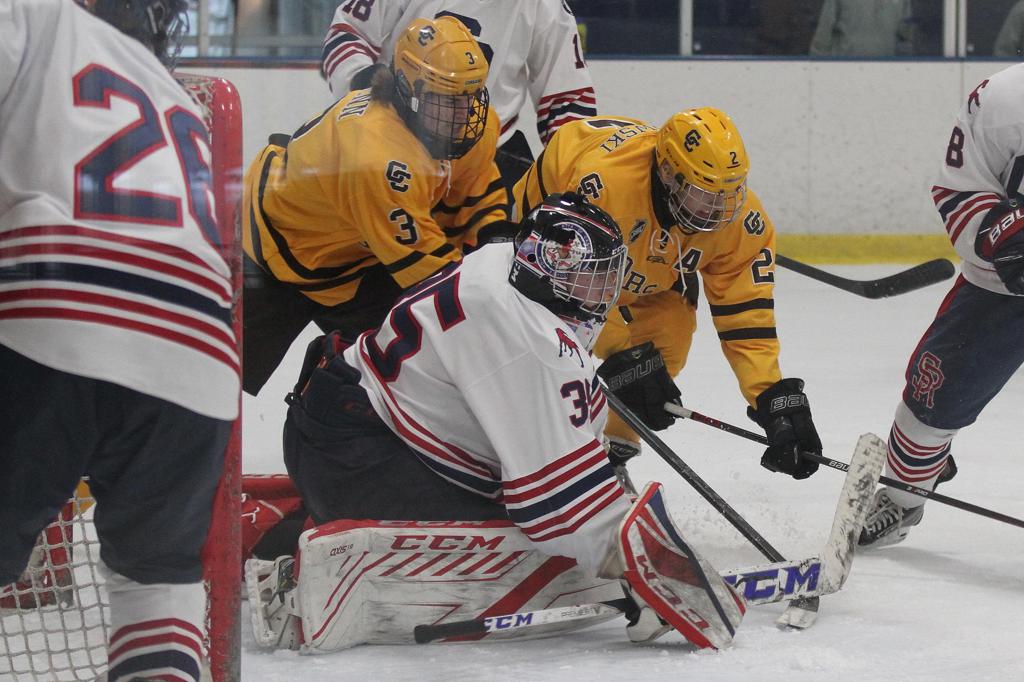 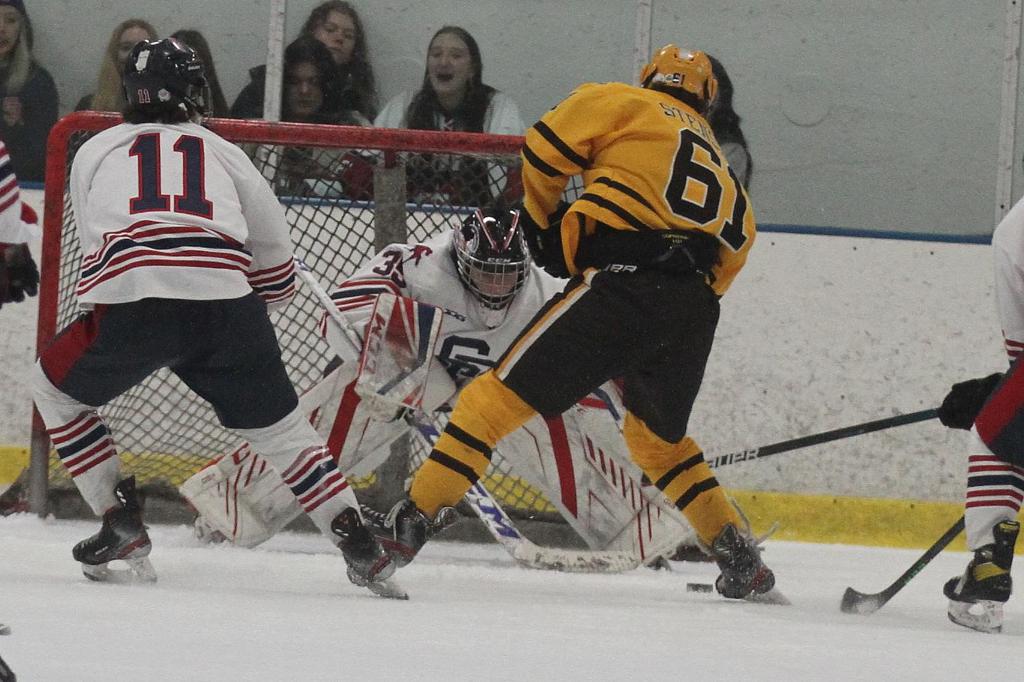 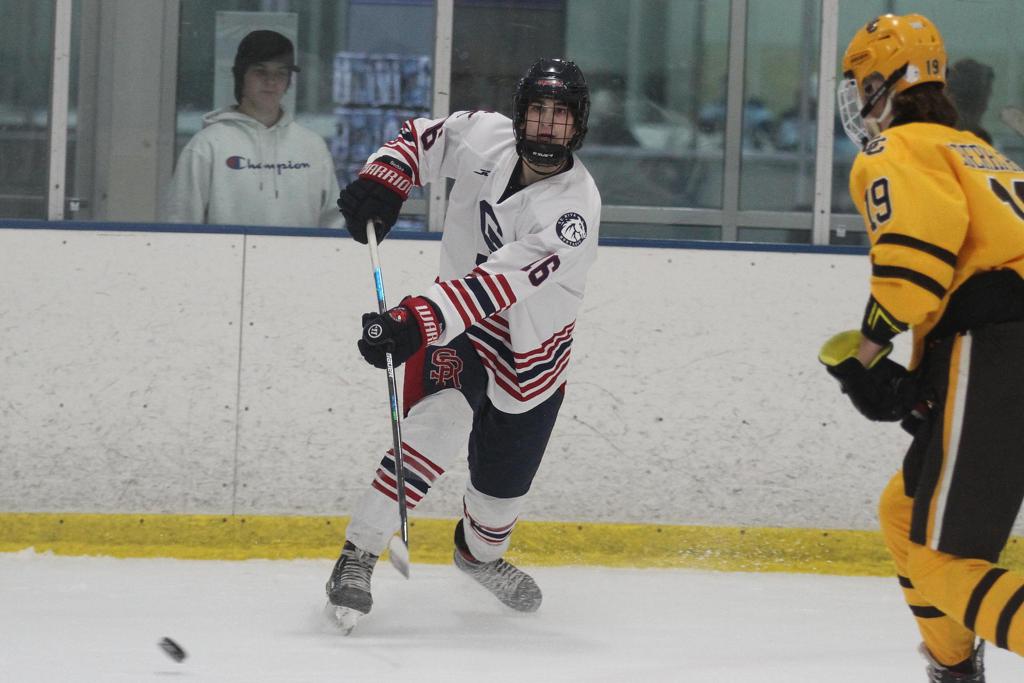 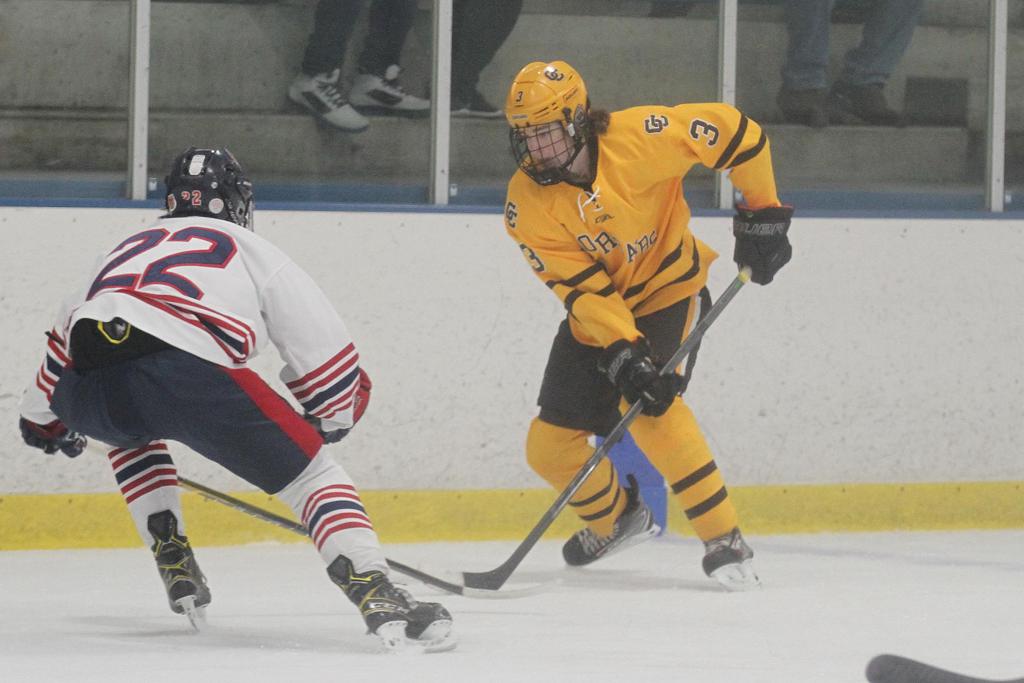 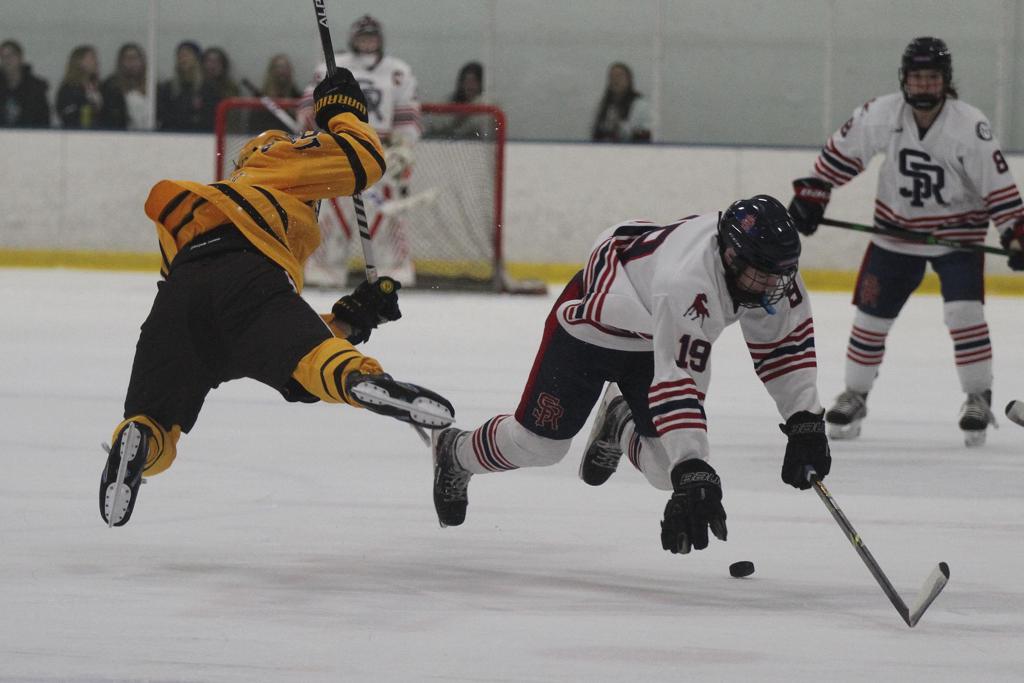 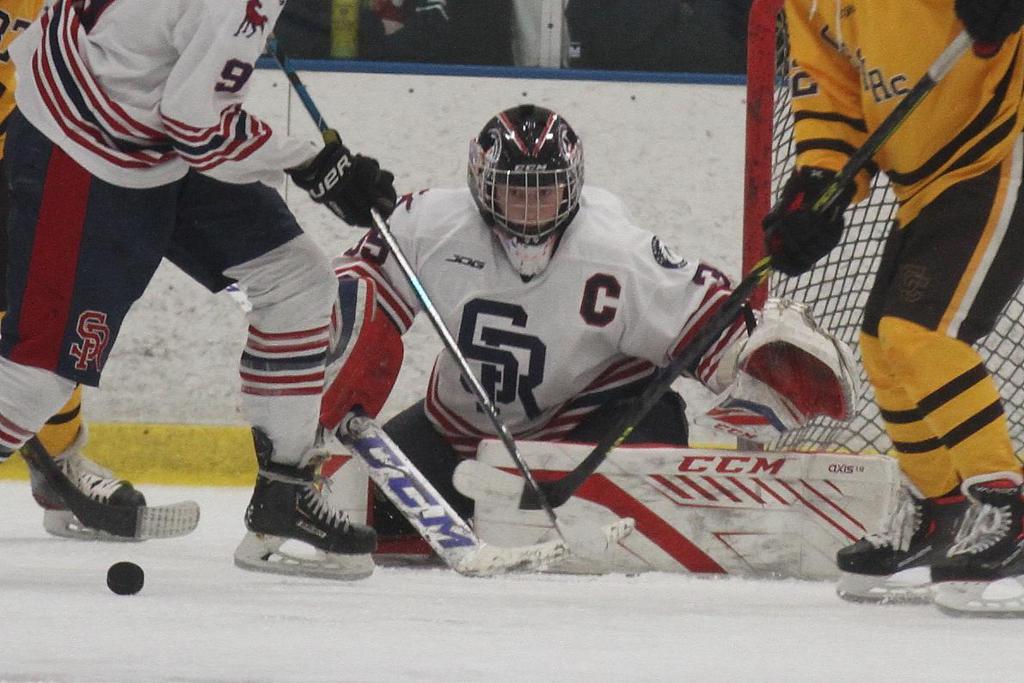