WOODRIDGE — Trailing by a goal in the second period, Benet not only found a spark, the Redwings ignited a full-fledged firestorm against Marmion in Game 1 of their first-round CCHL series on Sunday afternoon at Seven Bridges Ice Arena.

A six-goal second period turned a tight contest into a rout as the Redwings skated to a 9-3 victory. Benet’s balanced — and relentless — attack proved too much for the Cadets as eleven players found the scoresheet, including seven with multi-point games. The Redwings peppered 57 shots at Cadets goalie Charlie Donoghue.

“We kind of regrouped after the first period,” said Brendan O’Neill, who led the Redwings with two goals and an assist. “We started moving the puck more and good things happen when you’re moving the puck.”

The onslaught began in earnest midway through the second period when Ryan Farago evened the score 2-2 with a low wrist shot past Donoghue’s blocker pad. Less than a minute later, O’Neill gave Benet its first lead with a tap-in goal set up by Zandis Hoover.

Goals from Giovanni Maselli, Gabriel Szopinksi, and O’Neill for a second time put the Redwings in firm control, holding a 6-2 lead after outshooting the Cadets 26-5 in the middle period. O’Neill’s two-goal performance came after he scored only once during the CCHL regular season.

“Great second period but what was great about the whole game is that I got some guys on the scoresheet who hadn’t scored much,” Benet coach Jon Grzbek said. “That’s deadly during playoff time if you can spread out the scoring through all four of your lines. That helps the first two lines find more room.”

The second-seeded Redwings (17-3 regular season) had to overcome a sluggish start against No. 7 Marmion, which went 9-11 during the regular slate.

The Cadets held a 1-0 lead after an evenly-played first period. Graham Robertson completed a two-on-one shorthanded attack with only 52 seconds left in the period. It was Robertson’s 10th goal of the season, while picking up an assist from CCHL regular-season scoring leader Chase Breslin.

Benet struck for a goal from Sperling early in the second to tie it, but the Cadets responded less than two minutes later when Breslin scored the first of his two goals. But the Cadets highlights pretty much ended there.

“It was a little embarrassing,” said Breslin, who had 19 goals and 19 assists to win the regular-season scoring title. “Benet’s a really good team, so we knew it was going to be a battle. We had that 1-0 lead after the first and showed we could beat them.”

Benet completed a sweep with a 4-0 victory on Monday night at Fox Valley Ice Arena in Geneva, firing another 68 shots at Donoghue and getting goals from Budreck, Maselli, Christian DiBenedetto, and Hoover. Patrick Sullivan needed only nine saves to earn the shutout.

Budreck scored his 18th goal of the season just 48 seconds into the game. Maselli followed with his 9th at 13:53 as Benet took a 2-0 lead after one period while holding a 25-1 advantage in shots.

DiBenedetto and Hoover scored just over three minutes apart in the second to complete the scoring. Budreck, Maselli, and Hoover each finished with a goal an an assist, while Farrago added a pair of assists.

Donoghue finished with an astounding 112 saves in just two games for the Cadets.

“He’s been standing on his head all year for us,” Marmion coach Christian Esposito said after Sunday’s loss. “Despite the goal count tonight, he’s been outstanding for us. We really needed to do a better job in front of him and give him the help he deserves. He battles for us every single night.”

Second-seeded Benet next takes on sixth-seeded Fenwick in a Kennedy Cup semifinal series on Feb. 12.  Fenwick advanced through its quarterfinal round against third-seeded Providence Catholic, winning 3-2 in a series-clinching third game on Monday.

Benet and Fenwick split their two regular-season meetings; Benet won 8-6 on Oct. 22, and Fenwick won 5-3 in the rematch on Jan. 8. 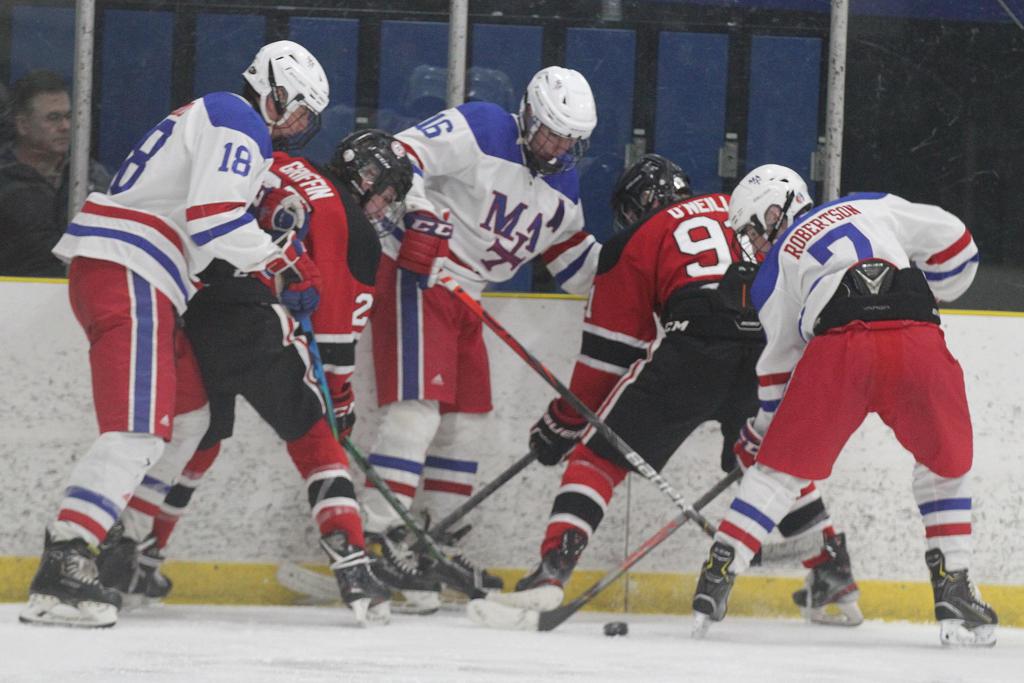 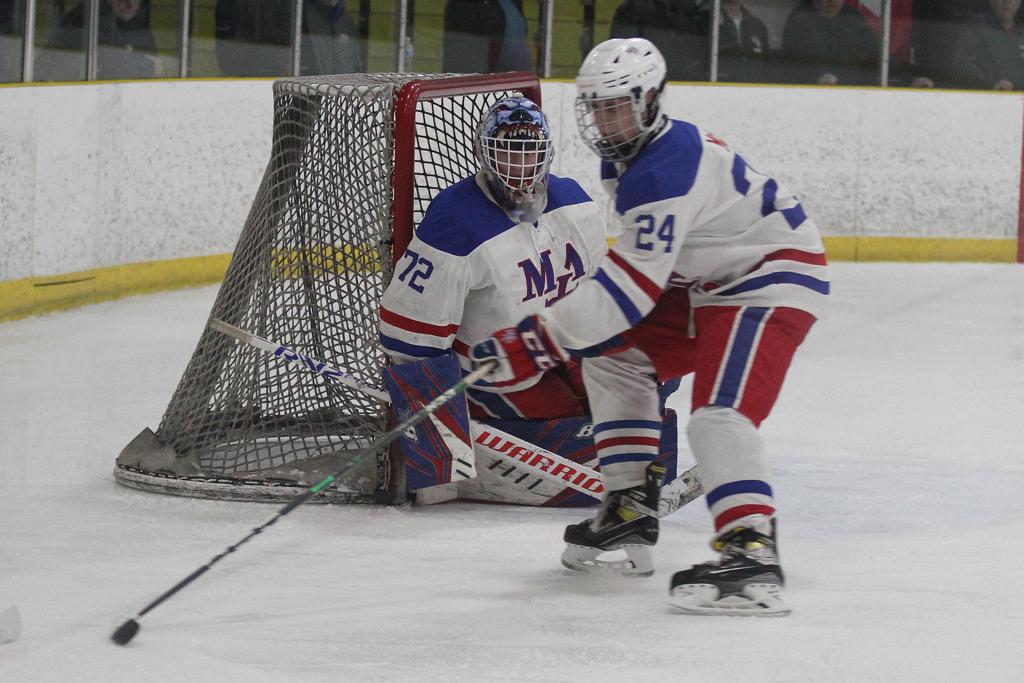 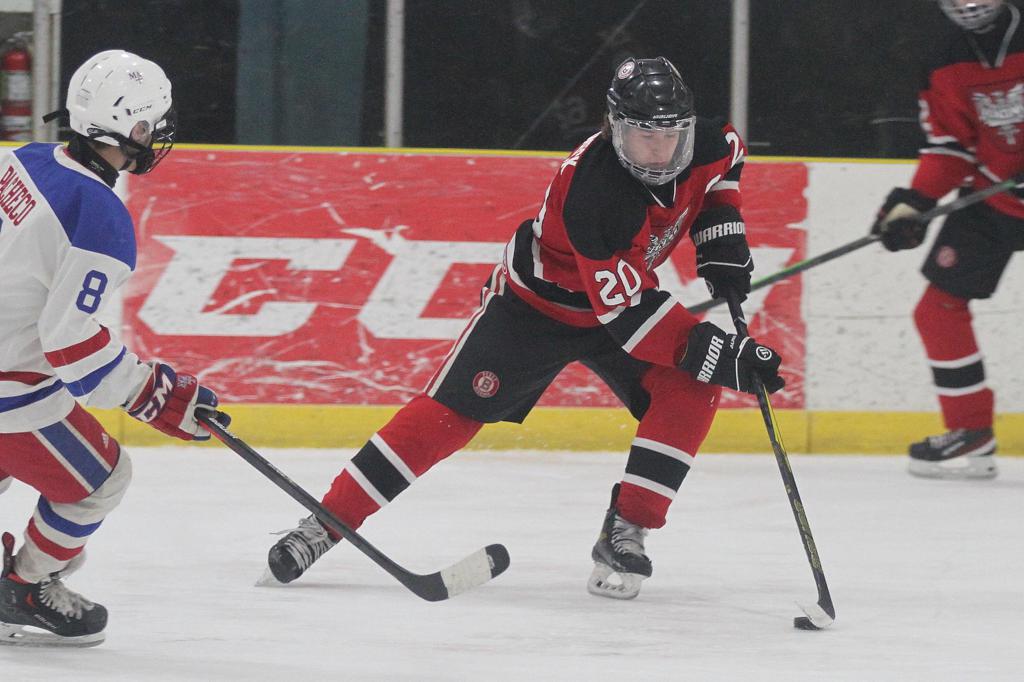 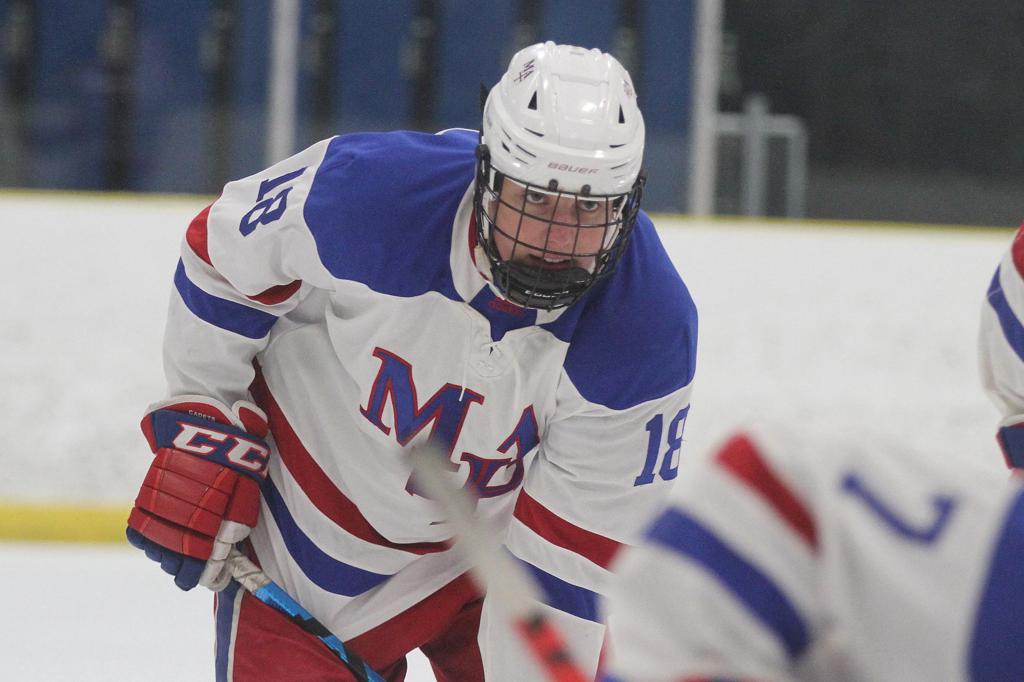 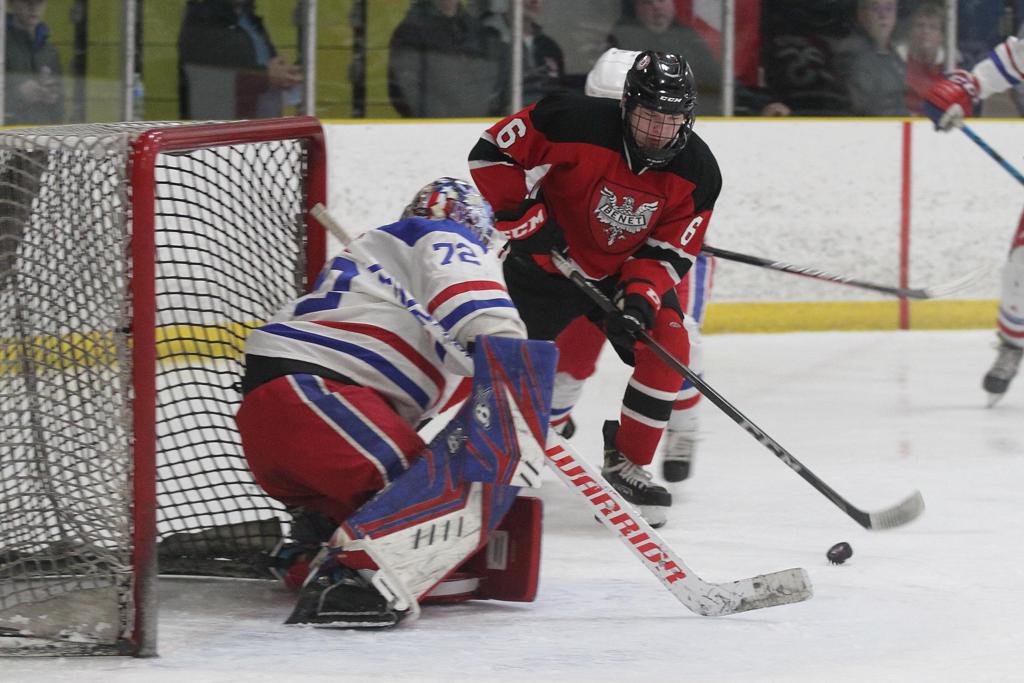