WILLOWBROOK — The game’s final second ticked away and his entire career at Fenwick narrowed down to one thing for Friars captain Sam Chioda.

Sixth-seeded Fenwick’s 3-2 win over third-seeded Providence Catholic on Monday sent the Friars into the semifinal round of this year’s Kennedy Cup playoffs, where they’ll take on Benet in a best-of-three series.

In a best-of-three series against Providence and a third game filled with spotlight moments for both teams, the biggest spotlight landed on Fenwick sophomore Mike Verni; with two minutes left in a game tied 2-2, Verni rode up on his white horse and played the hero.

“Our defenseman skated it wide and kind of threw it to the front. It went off a defenseman’s skate, the goalie shifted over, and I just kind of tapped it in,” Verni said. “Then I was in shock.”

Bedlam ensued at the final buzzer, as Fenwick’s players fairly lost their minds. The Friars’ bench emptied onto the ice and players skated a bee line to the glass behind the Providence goal.

Normally, players from the winning team swarm their goalie at game’s end; instead, the Friars raced to the large and raucous group of Fenwick’s student fans that stood behind the glass at the Celtics’ end of the ice.

Fenwick goalie Santino Ori was not offended that his team broke protocol, as he skated the length of the ice to join the celebration.

“We have the best fan-base in the entire state. There’s no one better,” Ori said. “It fires me up just seeing them here.

“We never gave up. We went a hundred percent and that’s how we won today. We out-skated them in a close game and I thought the team that worked harder won.”

The visiting team won every game in the Providence-Fenwick quarterfinals. Fenwick won 3-2 at Providence Friday, and Providence won 2-1 in overtime at Fenwick on Saturday.

Monday’s pivotal game was played fast and hard from puck drop to final whistle. Providence opened the scoring when Vince Felice scored his 9th goal in CCHL play at the 10:38 mark, with assists from Aidan Castleton and Noah Oliver.

For the next five minutes, Providence built to an 11-7 edge in shots, killing off two Fenwick power plays along the way. Fenwick applied better pressure in the final five minutes of the first period and finished with a 13-11 edge in shots.

And it was those two Providence penalties that changed things in Celtics coach Nick Iaciancio’s mind.

“We talked about getting a lead and we did, and we played well after that,” Iaciancio said. “But one of the things we’ve been snake-bit by all year is penalties. We lost some momentum there and kind of opened the door, and they barged in and started taking it to us.”

Despite the momentum swing, Providence goaltender Luke Brzezinski kept the lid on net, turning away shots and covering rebounds as the Celtics held a 1-0 lead after one period of play.

“He’s been phenomenal all year,” Iaciancio said. “Luke’s a four-year starter for us and between him and Drew (Pavich), they’re the reason we finished the way we did in the regular season.”

Brzezinski stopped consecutive Joe Krzak shots from the point to start the second period, and Providence nearly doubled its lead at at the 13-minute mark when Emilio Arana crossed a puck to the far post but Mark Chocola’s shot went just wide.

Fenwick ultimately outshot Providence 32-30, so both teams certainly had their scoring chances.

Fenwick killed off a penalty around the 10-minute mark and tied the game with 5:10 remaining in the second when Cam Corvo netted his 23rd league goal of the year. Corvo crashed net and buried a rebound, with assists going to Eddie McFadden and Mikey Curtin.

The Friars struck again just three minutes later on a McFadden goal at 2:05, with Johnny Sena and Will Steadman on the assists.

“We can score four goals out of nowhere when these kids are building off of one another, and it’s just about staying composed in games like this,” Fenwick coach Nick Chiappetta said. “I loved the way we stayed composed throughout.”

Providence tied the game 2-2 early in the third period, when Nico Felice found space to fire on the right side. His shot from just outside the circle stretched the back netting with 14:32 left in the game. Carson Burris got the assist on the game-tying goal.

Providence had two power plays and Fenwick had one as the third period played out from there, but neither team capitalized. Brzezinski and Ori took turns standing tall in goal down the stretch, before Verni’s game-winner arrived with an assist to Owen Fask.

When it was over, Iaciancio tipped his hat to the Friars’ effort.

“They did a great job of getting pucks deep in our zone, being physical, and keeping us locked down in our zone,” Iaciancio said.

“We’ve struggled getting pucks out of our zone all year. We thought we turned the corner on that but the playoffs are a different animal. (Fenwick) probably played a little bit harder and a little bit hungrier than we were during certain points of the game. I thought we had a nice push there in the third, but then we made some mistakes and they turned around and got the game-winner.

That game-winner was Verni’s second CCHL goal of the season.

“Mike Verni is a guy that has been in the woodworks all season long,” Chiappetta said. “He’s the kid that doesn’t score the goals but feeds everyone. He got the game-winning goal tonight and he deserves it more than anyone. He’s a smart player, his vision is second to none, and he gives everyone opportunities to score. To see him get a goal tonight was icing on the cake for everybody.

“And Santino has played great. He’s been our foundation all season long and the guys have rallied behind him in his senior year. He wants a deep (playoff) run and he’s earned that.”

Calling the series win over Providence an upset may be accurate based on seeding, but this is not the same Fenwick team that started 2-6-0 in CCHL play. The Friars went 8-3-1 the rest of the season in league play as veterans and underclassmen found cohesion.

“It’s night and day since the beginning of the season,” Chioda said. “We’ve gotten so much closer and so much better as a team. It’s really just chemistry and much more confidence when we go out there in big games.”

GAME NOTES
Fenwick
With Steadman, Corvo and company on the attack and a defense anchored by Chioda and Ori, Fenwick takes on second-seeded Benet on Feb. 12 in the first game of a best-of-three semifinal series. The Friars know they’ve got their work cut out for them.
Benet swept Marmion in two games in their quarterfinal matchup, and the Redwings outshot the Cadets 68-9 in a 4-0 win to close out that series on Monday.
“Benet’s a great team, there’s no going around it,” Ori said. “They’ve lost three (CCHL) games the entire year. We beat them once this year and we know we can score on them, but we have to out-work them.”
The fan support Fenwick got from fellow students was one of those intangible advantages that the Friars enjoyed all night. Those fans also made the trek from Oak Park to Orland Park for Game One on Providence’s home ice.
“It’s that Friar pride — take pride in what’s happening at your school — and the guys love it.  It gives everyone energy to see them all out here on a Monday night at 8:20,” Chioda said, “It was something else.”
Providence
The Celtics live to fight another day once the state playoffs begin, and Providence has a player who consistently does something that coaches around Illinois preach all season, every year.
“Really through the whole series and kind of unheralded is one of our junior defenseman, Travis Briar,” Iaciancio said. “We put a huge emphasis on blocking shots and he has blocked 99 shots this season, which is a school record. I’m sure we’ve had kids play for four years who never got above 60 in their career. He has played through a concussion. He has really taken strides for us in the last month or so, and became someone we depended on down the stretch.”
“It’s a heart and a gut thing. You’re going to occasionally get that stinger but you need to be willing to go do that because it really does change the momentum of the game.”
Capitalizing on scoring chances becomes a preeminent requirement during playoff hockey, and the Celtics needed to get a few more past Fenwick goalie Santino Ori in Monday’s decisive Game Three.
“(Ori) made a save on a breakaway, we had a couple tips, and we missed two tap-ins and one rebound,” Iaciancio said. “We didn’t go through the game without generating chances but in a playoff game like this you can afford one or two of those (misses) but not four or five of them in a tight game, against a team playing as well as they did.” 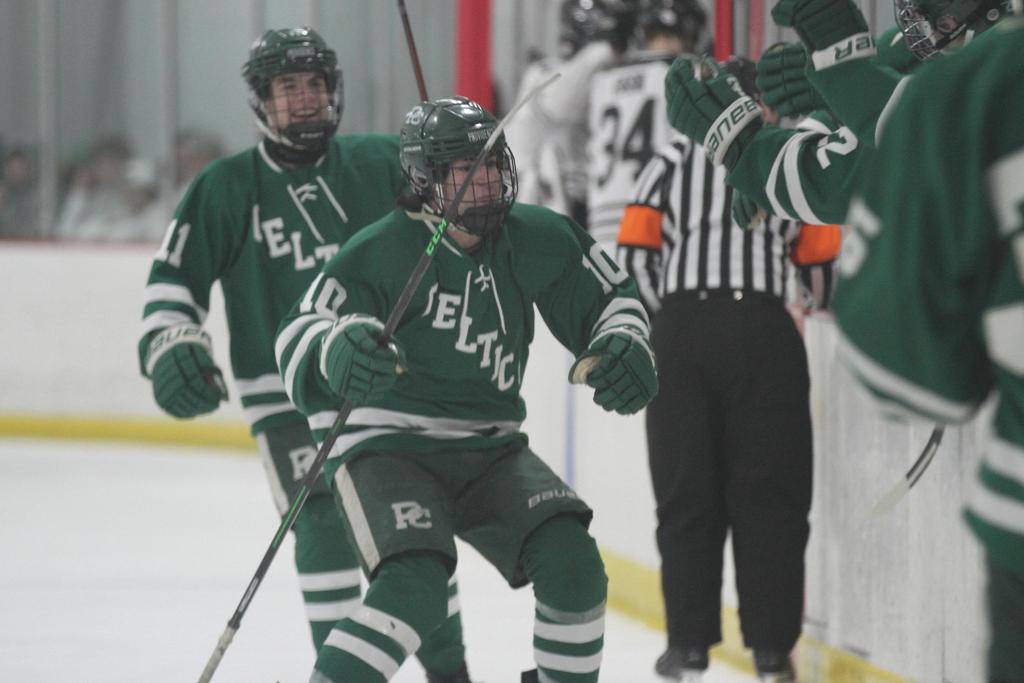 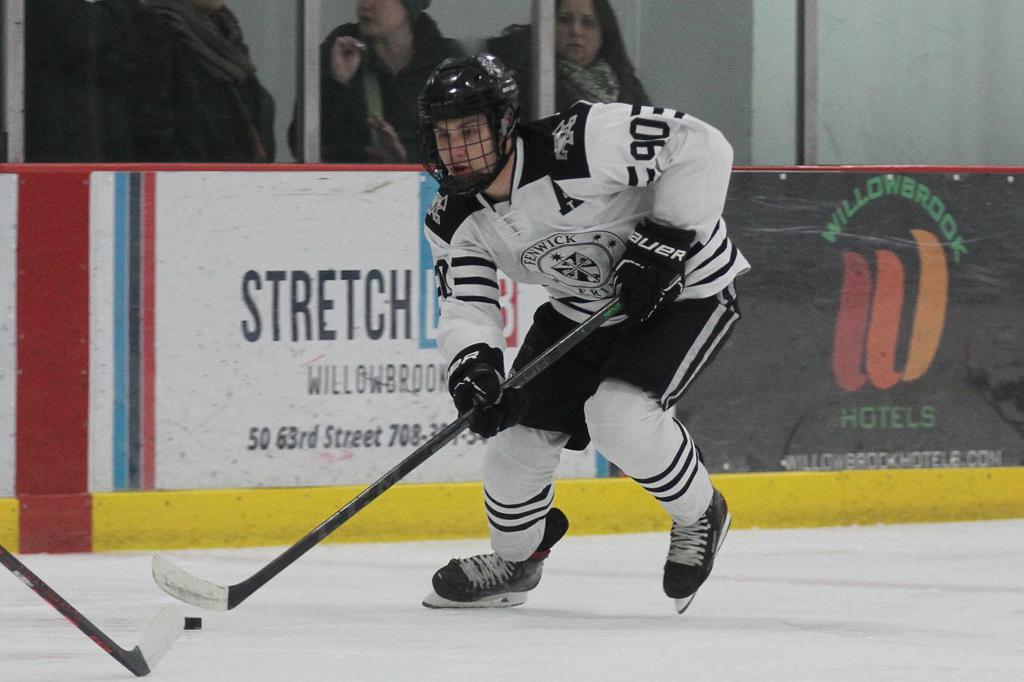 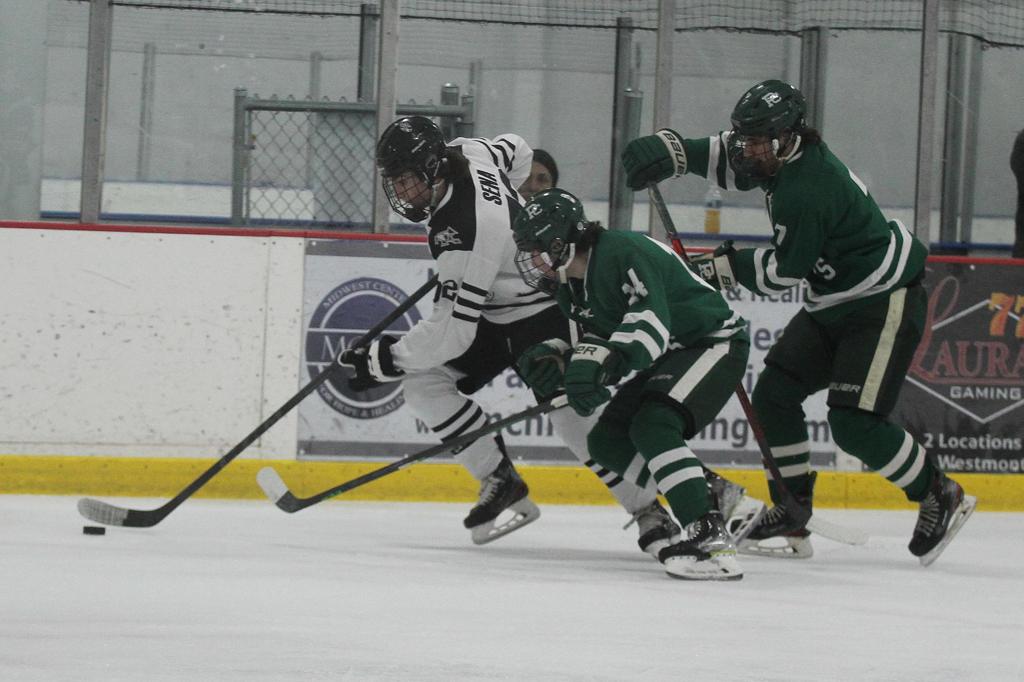 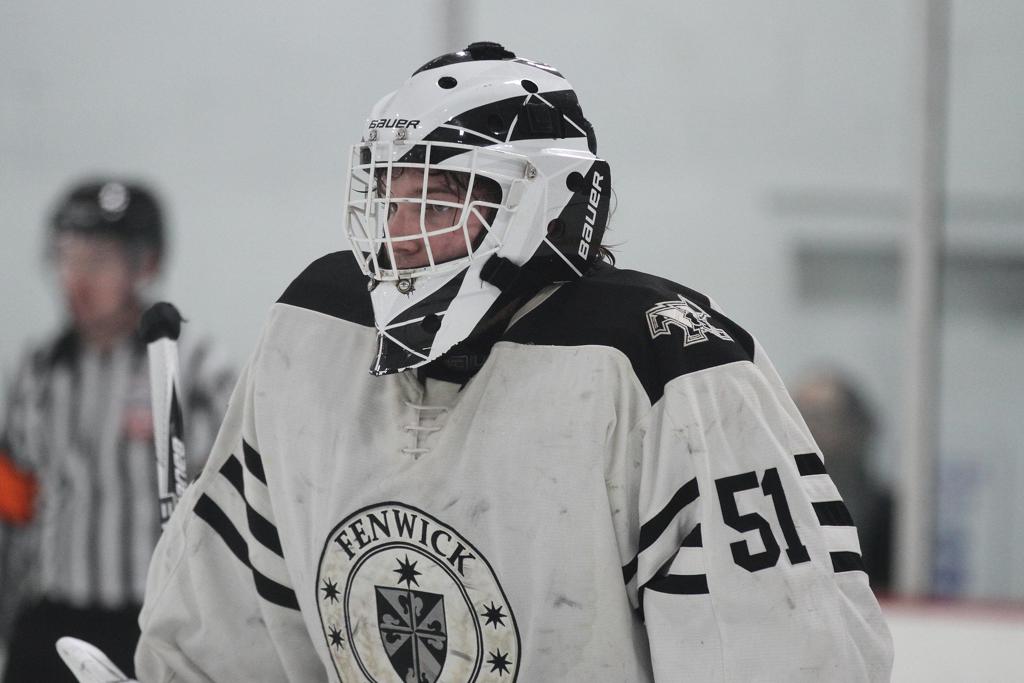 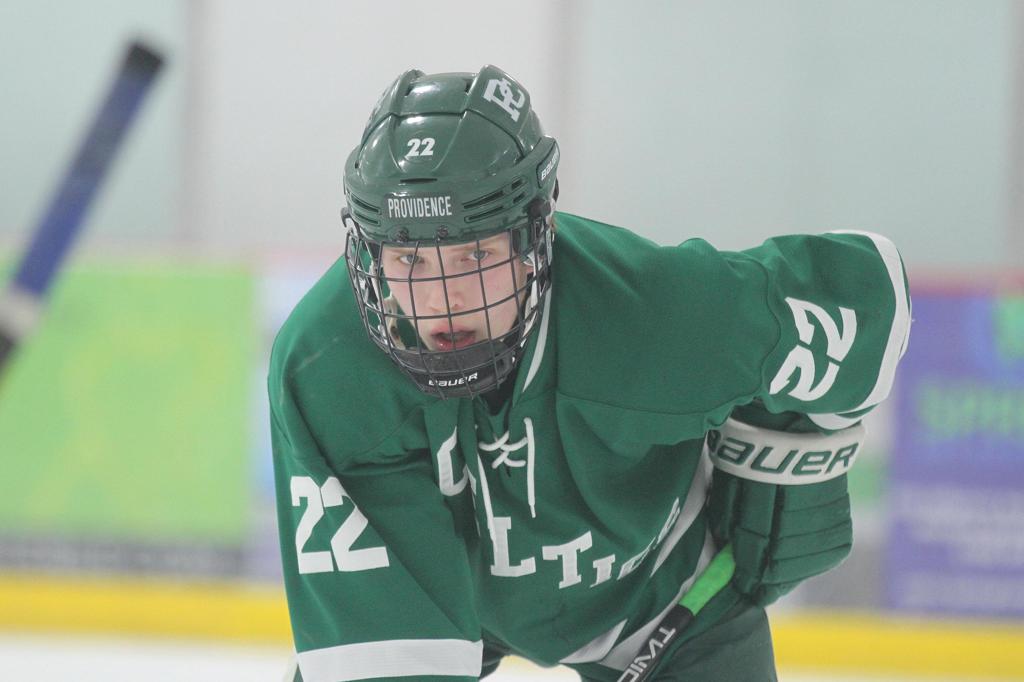 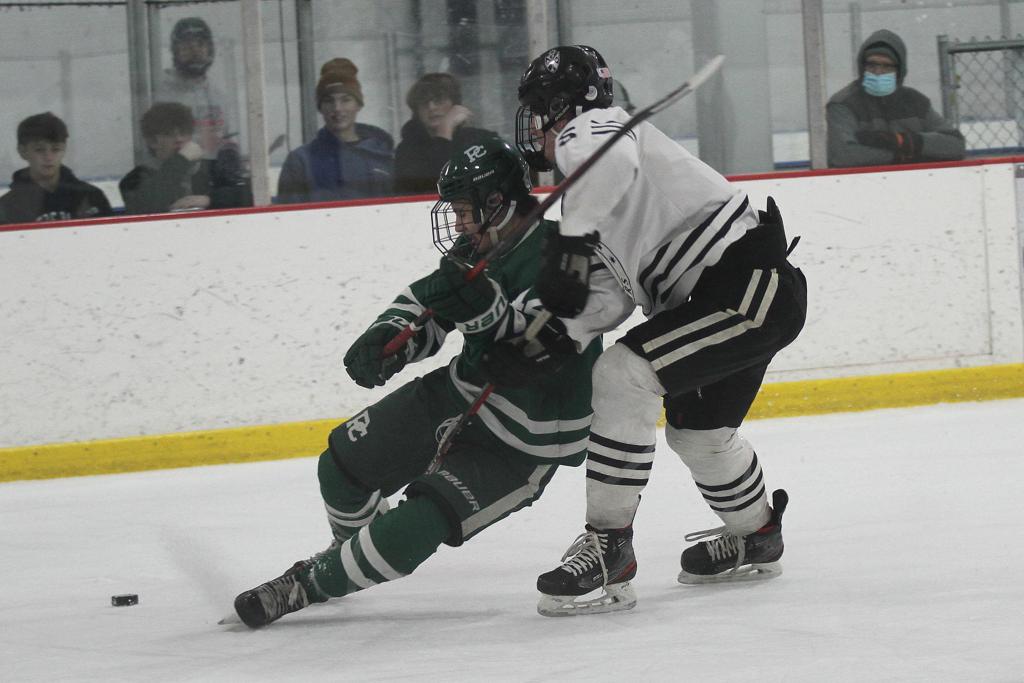 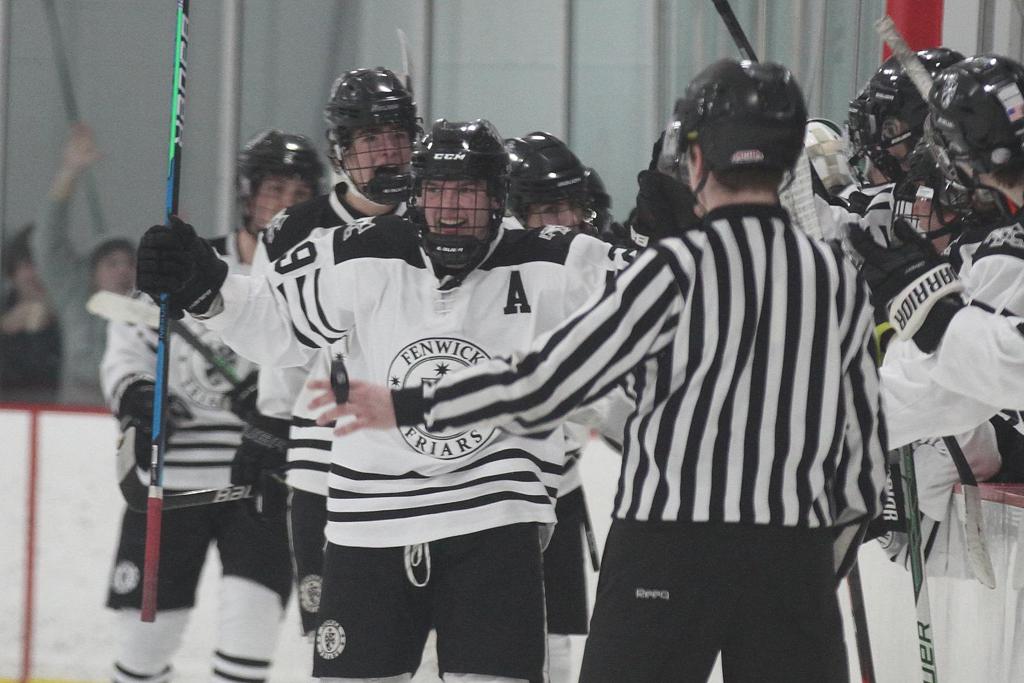 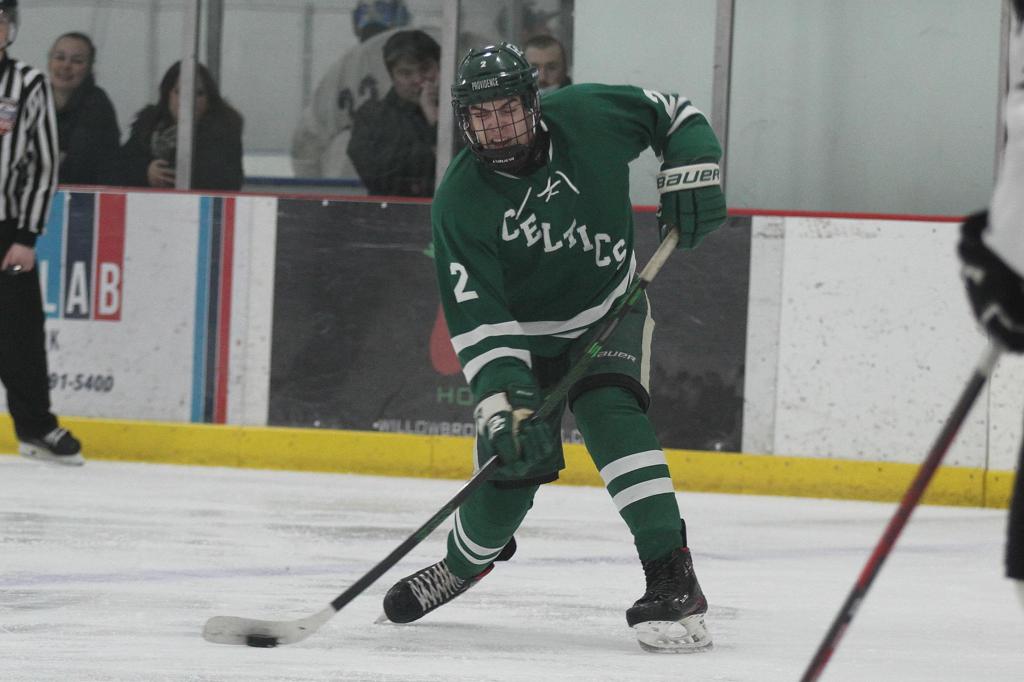 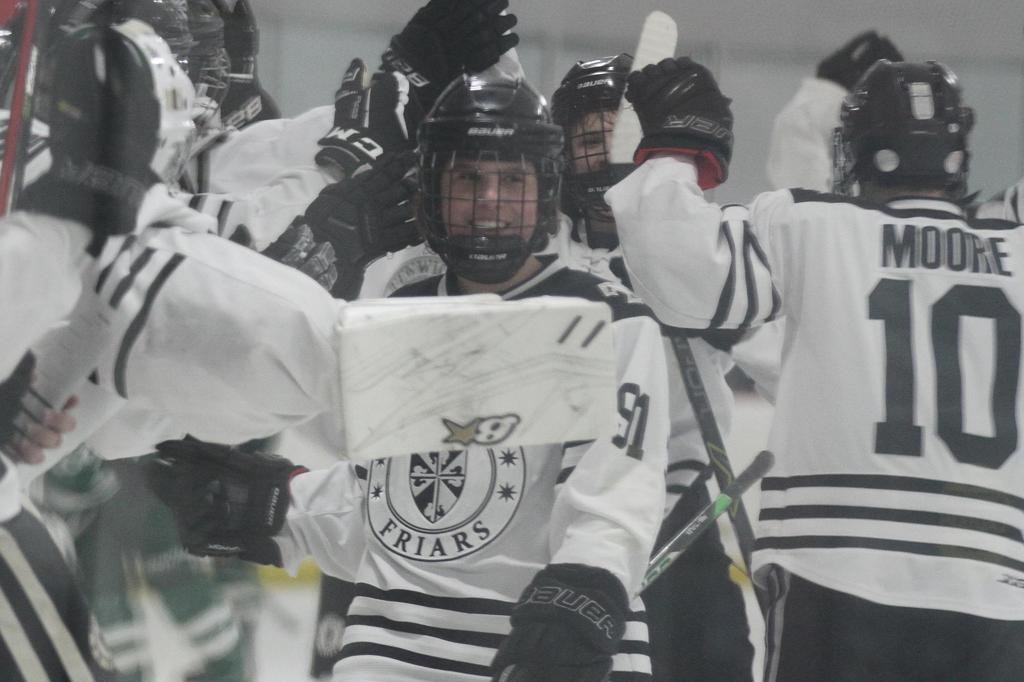 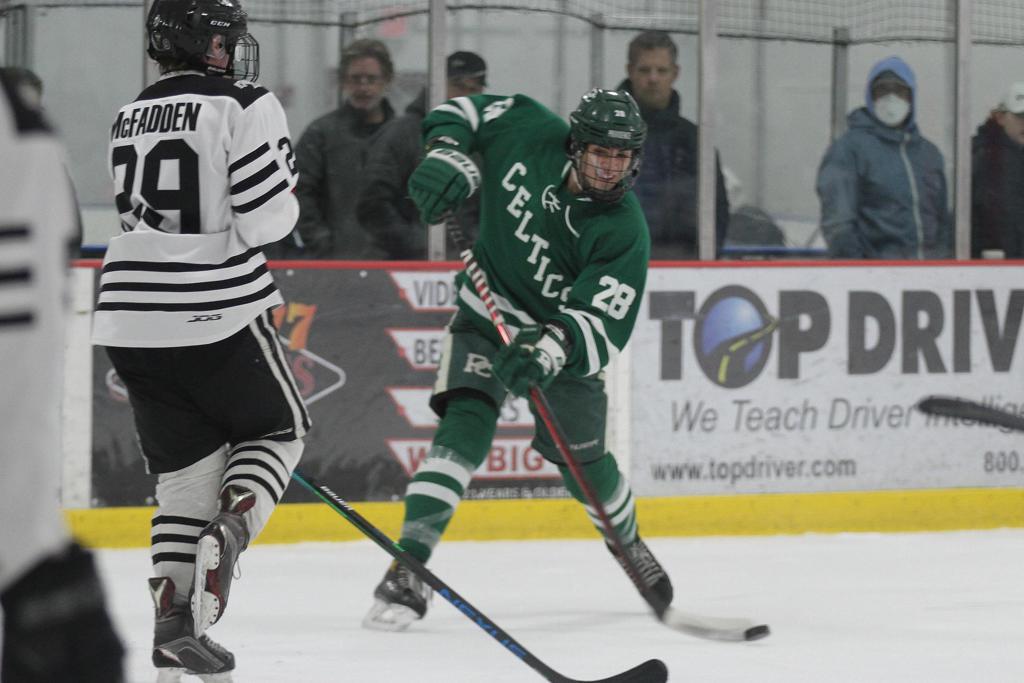 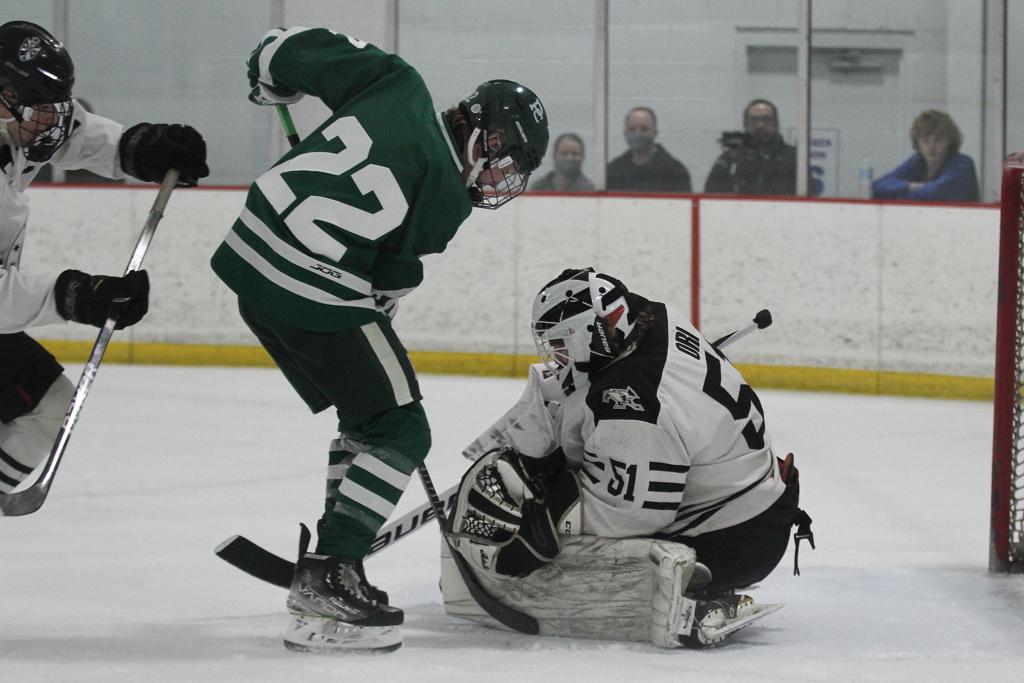 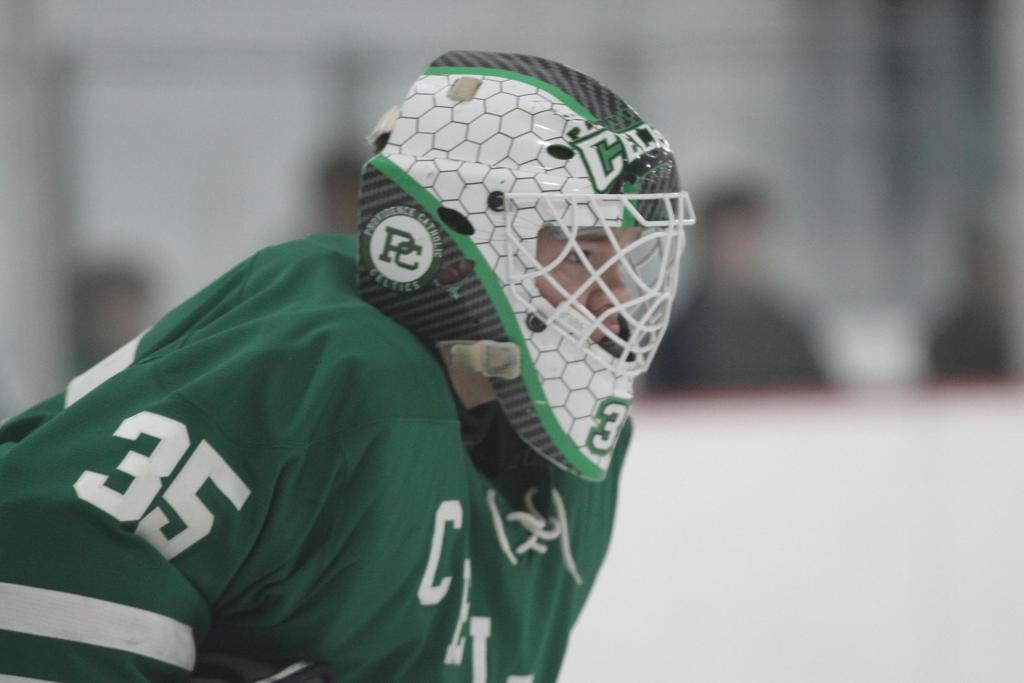