OAK PARK -- Five long months ago, a Providence Catholic team long on youth and short on experience lost its first game of the season 9-0 to Glenbrook North. A Celtics team loaded with underclassmen had to mature, and the team’s seniors knew what would be required.

“A lot of patience. And that’s not my forte,” joked Providence forward Emiliano Arana.

Luckily for the Celtics, Arana and the team’s other upperclassmen found the patience needed while a large group of sophomores and freshmen found its footing.

That patience has paid off.

Five months after that bad opening-season loss, Providence won 4-2 over CCHL leader St. Ignatius on Jan. 21. One week later the Celtics won 5-2 at Fenwick, and two days after that they won 1-0 at Carmel Catholic to clinch third place in the league with a 13-6-1 record.

The Celtics’ youngsters have come a long way.

“Our compete level is much better now than it was,” Providence coach Nick Iaciancio said. “We lost games early but every team we lost to, we’ve beaten the second time around. So our competition level got better and we’ve matured.”

Or, put another way:

“They went from scared little sophomores, really, to taking on anyone,” Providence captain Jack Doogan said of his young team.

A Fenwick team that had gone 8-2-1 in CCHL play since starting the year 2-6-0 came out with wind in its sails, ultimately posting a 26-19 edge in shots through two periods.

The first period ended 1-1 on a shorthanded goal by Providence’s Declan Rabe and a power play goal from Fenwick’s Will Steadman, who both finished with two goals on the day. Rabe’s goal was unassisted while  Michael Verni and Cam Corvo assisted on Steadman’s first goal.

Steadman, Johnny Sena, and Owen Fask found shots early in the second period but it was Arana who made it 2-1 when he took a puck towards the right corner before setting up his goal at the 12:39 mark.

“I cut it back and decided to launch one on net,” Arana said. “It ended up hitting an armpit and bouncing in. I can’t complain. Whatever works, works.” Drake Thomas and Tom Dukups assisted on Arana’s 17th CCHL goal of the season.

Steadman crashed net and buried a rebound at the far post to tie the game at 8:35 after an Eddie McFadden shot taken from the left side, with Billy Buckley also assisting on the play. It was Steadman’s 15th league goal of the year. The senior Steadman also leads Fenwick with 17 SHL assists.

Three minutes later, Providence’s Jameson Thulin essentially put the Celtics up for good, netting his third goal of they year to give the Celtics a 3-2 lead, with Vince Felice and Zach Xydakis assisting on the goal.

Fenwick kept coming but Providence goalie Drew Pavich made quality saves on shots from McFadden and Owen Fask, then stopped Fenwick’s Mikey Curtin and Corvo before the end of the second period.

Providence wasn’t thrilled with its play through two periods but held a one-goal lead at the break. Fenwick, meanwhile, had some regrets to mull over.

“I think their goalie (Pavich) played really well but we’ve got to finish on our opportunities,” Steadman said. “It’s one thing to get a lot of shots on net but you have to execute when you get those chances.”

Fenwick coach Nick Chiappetta wished his boys could have been rewarded for their effort through two periods.

“We were playing some of our best hockey there in the first and second periods, but just couldn’t bury a puck,” Chiappetta said. “Give the credit to (Pavich), too, but you could tell that our frustration was building out there, when our kids just expected to be up going into the break. Good teams will capitalize on your mistakes so if you’re not burying pucks, it’s going to come back to bite you.”

The third period showed the distance Providence has traveled as a team this season. After a firmly instructive lecture from Ianciancio at intermission, the Celtics outshot the Friars 14-10 in the third, getting goals from Travis Briar and Rabe to secure the win.

“The first two periods were sloppy,” Arana said. “It wasn’t our kind of hockey. We needed to come into the third period and establish our game, and the I think the scoreboard reflected that. We really tried to shut them down. We’re going to keep a lot of pucks out of our net because of our goalies and our defense, and we were able to establish an offensive game and we got it done.”

Briar’s shot from a sharp angle on the left side deflected into net at the 12:48 mark of the third period, and Rabe’s second goal of the game came at 4:14 on a pass across the slot from the left side by Ethan Ganz, who found Rabe at the far post for the score

It was Pavich who found Ganz up the left side, earning a rare goalie assist on the play.

The final four minutes ticked off and Providence had its 5-2 win. Afterwards, Iaciancio talked about one of the lessons his team had to learn this season, which came to fruition in a pivotal third period against Fenwick.

“We’re a small team and we get ourselves in trouble when we try to have stick battles because we just get out-muscled,” Iaciancio said. “We have to get body position there and we have to be aggressive. We have to take away time and space because we’re not going to win any physical battles there.

“We did that a little bit better period by period. We’ve been off for eight days or so, so it was good to see us get better each period, and something clicked in the third period. We started getting pucks to the net, got a few fortunate bounces, and then we started to pick up some momentum.”

Providence defenseman Doogan ascribed the win to one of the most basic tenets in hockey.

“We were trying to do too much ourselves in the first two periods,” Doogan said. “We weren’t making the breakout passes, and we started to pick our head up in the third.”

Despite the loss, Fenwick — which finished in seventh place in the CCHL — is poised to be a problem in the league playoffs after going 8-3-1 in SHL games down the season’s stretch.

Like Providence, the Friars entered the season in need of some varsity seasoning.

“We have one of the youngest teams in the league and for a lot of our guys it was their first season of varsity hockey,” Steadman said. “So we had a lot of guys on that learning curve who have come a long way. They know what they’re doing now. They had the skill and just had to get used to the pace.

“Early in the season guys were a little more jittery, and that translates into the ‘D’ zone. Now that guys have settled in, that’s not an issue anymore.”

After a 2-6-0 SHL start, the Friars have shown their coach what they’re made of.

“I’m proud of the way our guys responded in the middle of the year,” Chiappetta said. “It would have been easy to mail it in for the rest of the season after a difficult start. But the guys came together, we had an out-of-town tournament that helped bring them together, and they haven’t looked back since then and have competed in every game.”

Providence Catholic
There has been no shortage of players elevating their play for the Celtics this season, and recently there’s been a rookie forward worth noting.
“Jameson Thulin is a freshman and he’s been playing really well for us for about three weeks,” Iaciancio said. “He’s our most physical player and he’s been that guy — when we need a spark, he’s been able to give it to us.”
Arana and Vince Felice have led the Celtics in CCHL goals scored this year, and Arana scored in Sunday's 1-0 win at Carmel to clinch third place in the CCHL.
Ianciancio was also happy to see Rabe put two in net against Fenwick.
“Declan had a great goal to get us started, so that was nice to see,” Iaciancio said. “It’s nice when you don’t always have to rely on the same (scorers). Other guys chipped in today.”
Doogan and Nico Felice have been the Celtics’ stalwart defensemen this season, while four-year varsity goalie Luke Brzezinski and Pavich have both been rock-solid for Providence, which  has given up the fewest goals allowed this year in CCHL play.
Doogan now sees a quality connection between his side’s defense and offense that simply took some time to develop.
“Early in the year we couldn’t get the puck out. Our wingers were scared to get hit,” Doogan said. “But we’ve been in the weight room a lot and the young guys started playing with a lot more confidence. Everyone around the league was telling us it’s not our year but we’re ready to play.”

Fenwick
The Fask brothers. CCHL teams will get used to game-planning for Fenwick freshman Owen Fask and sophomore Carter Fask for two more seasons.
Add freshman Johnny Sena into the mix and the Friars’ offense should be set for the near future.
“Sena is one of those players that will work harder than anybody on the ice,” Ianciancio said. “Owen Fask shines skill-wise and creates opportunities for us, and he and his brother Carter have a bit of that Sedin brother factor going. They just know where each other are at all times.”
With the CCHL and state playoffs looming, Fenwick will also rely on a top-shelf goalie in Santino Ori and players like defensemen Sam Chioda and Joey Krzak in front of him to make some noise.
“Sammy Chioda is such a vocal leader out there, everyone in the rink hears him, and he knows where he’s going with that puck,” Chiappetta said. “He’s the first one to pick everybody up regardless of what’s going on on the ice. We rely heavily on him. He probably plays fifty percent of the game, night in and night out.”
Offensively, Will Steadman (15 goals, 17 assists) and Cam Corvo (19 goals, 6 assists) have led the way where goal-scoring is concerned. Steadman was a creative force against Providence.
“Will is a very talented player across the entire league. He’s easily one of the players that stands out,” Chiappetta said. “Game in and game out, no matter who we’re playing, he is the player that our opponent hones in on, and he’s still able to play through it. He finds a way to get pucks to the net and find opportunities for us.”
Steadman is glad he chose to play high school hockey in his senior year.
“It’s one of the best decisions I’ve ever made,” Steadman said. “You play for a club team and it’s just not the same atmosphere. With high school hockey you have that atmosphere, that energy, and your teammates are really your family members when you play high school hockey. It’s so worth it.” 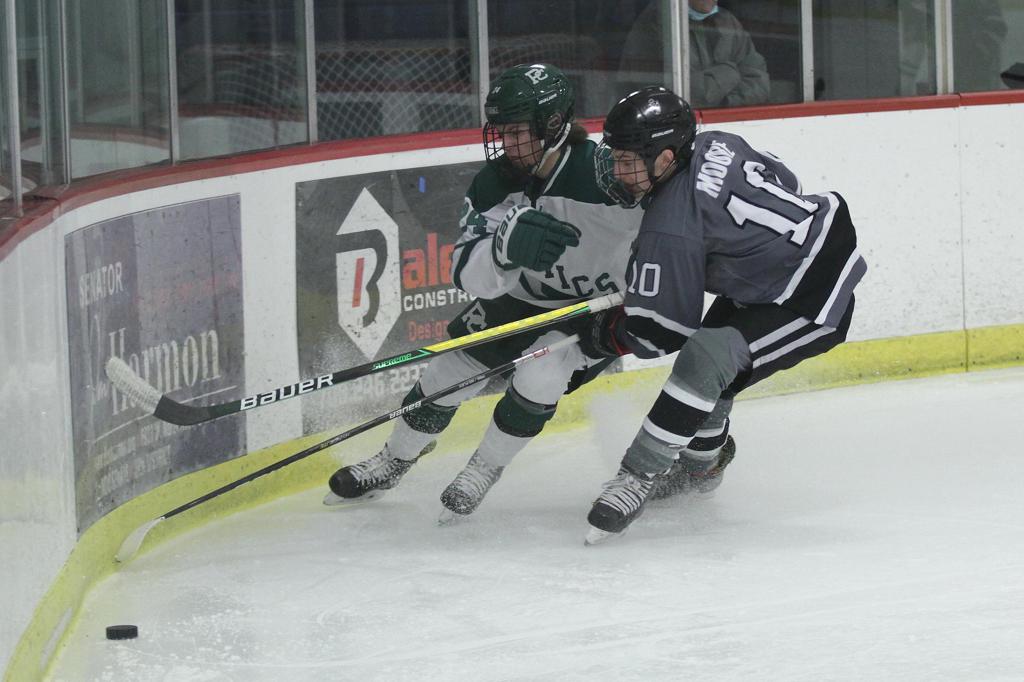 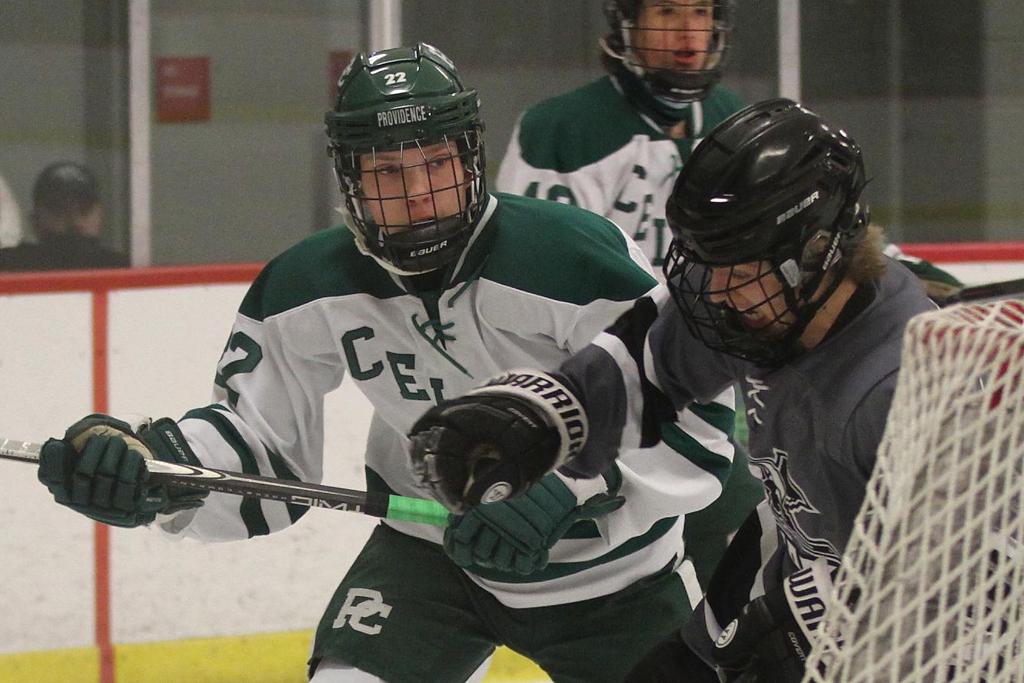 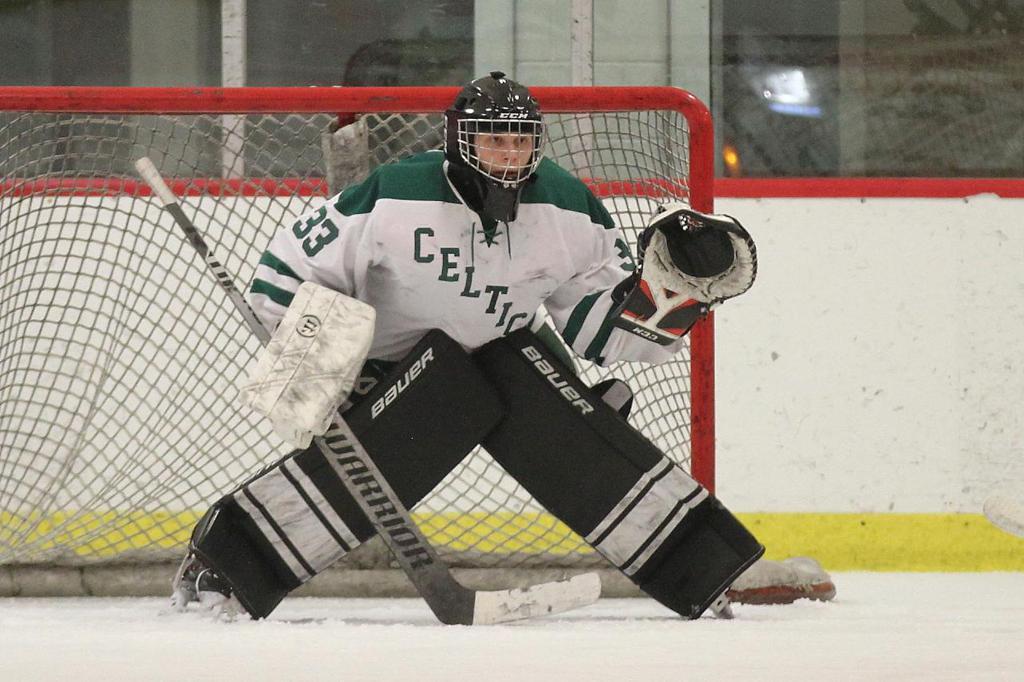 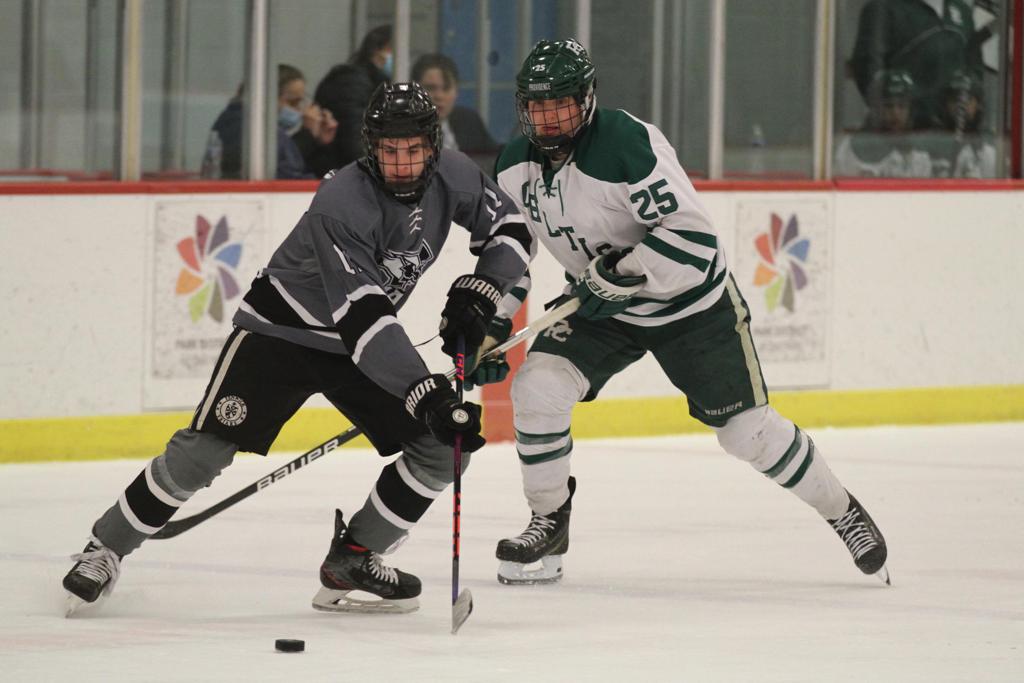 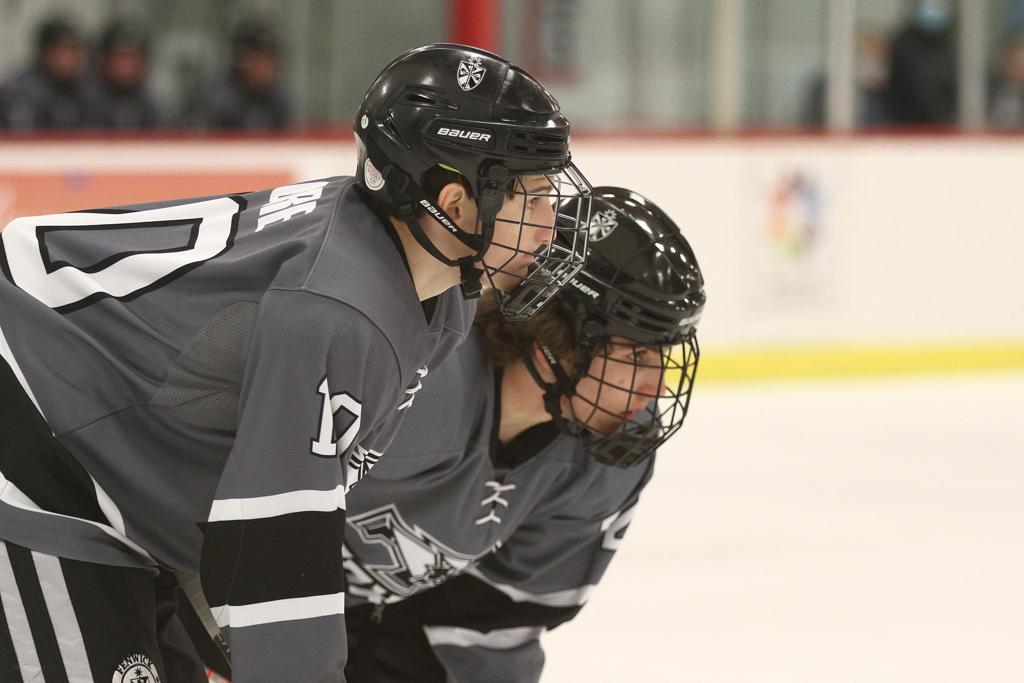 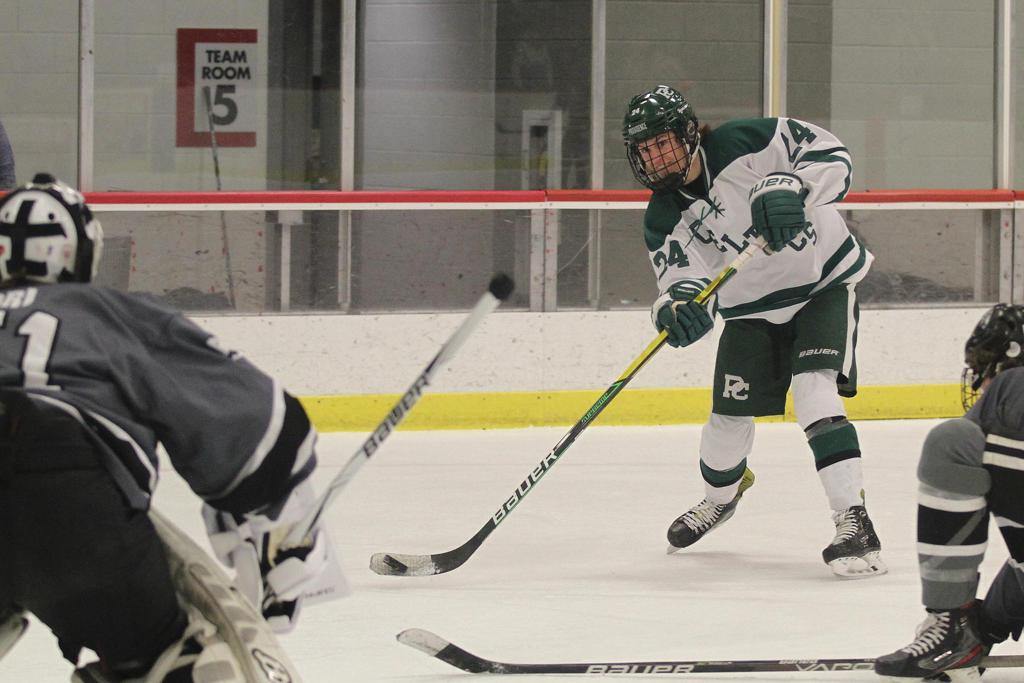 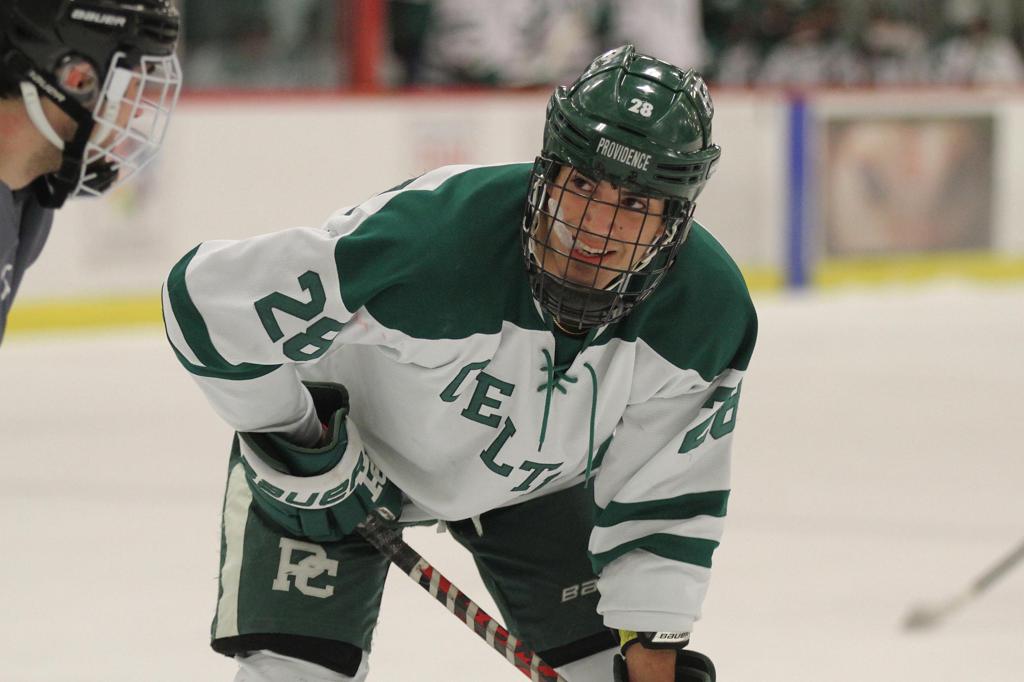 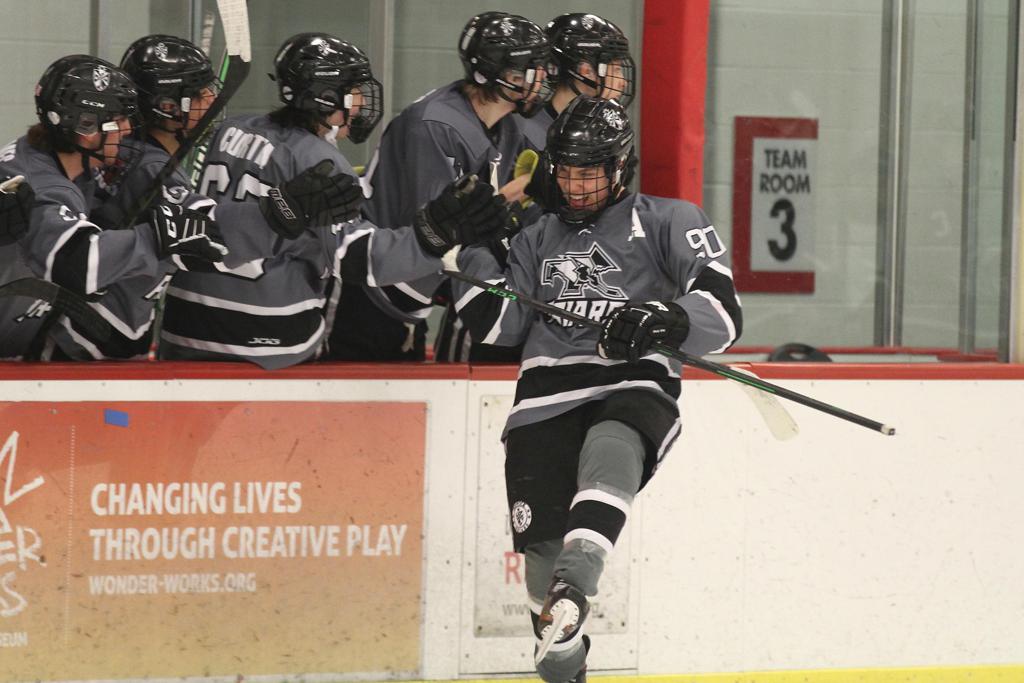 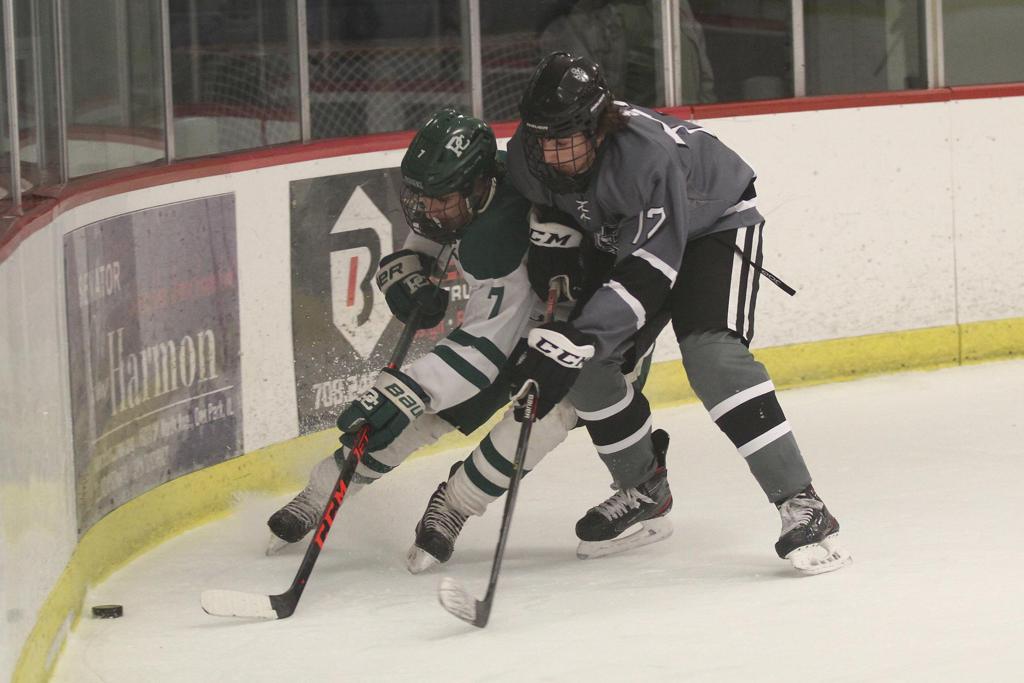 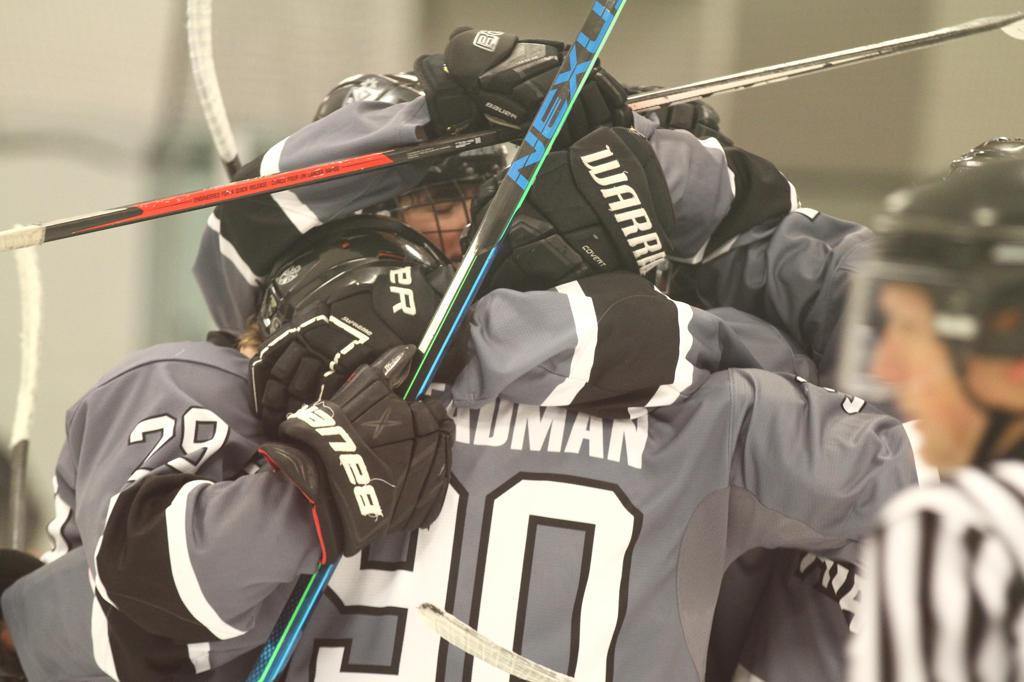 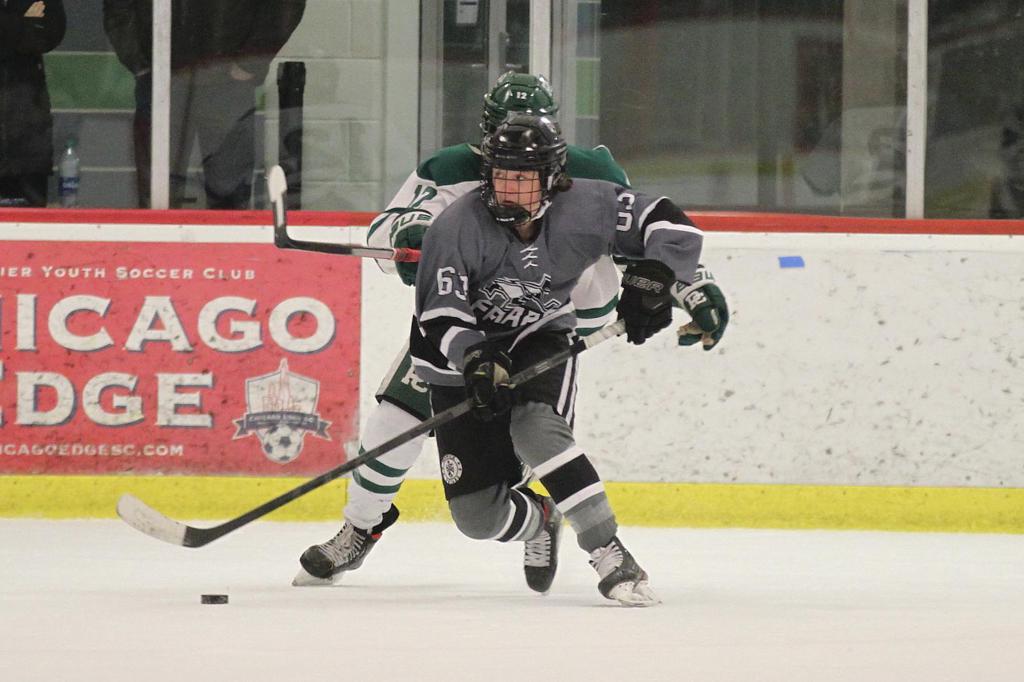 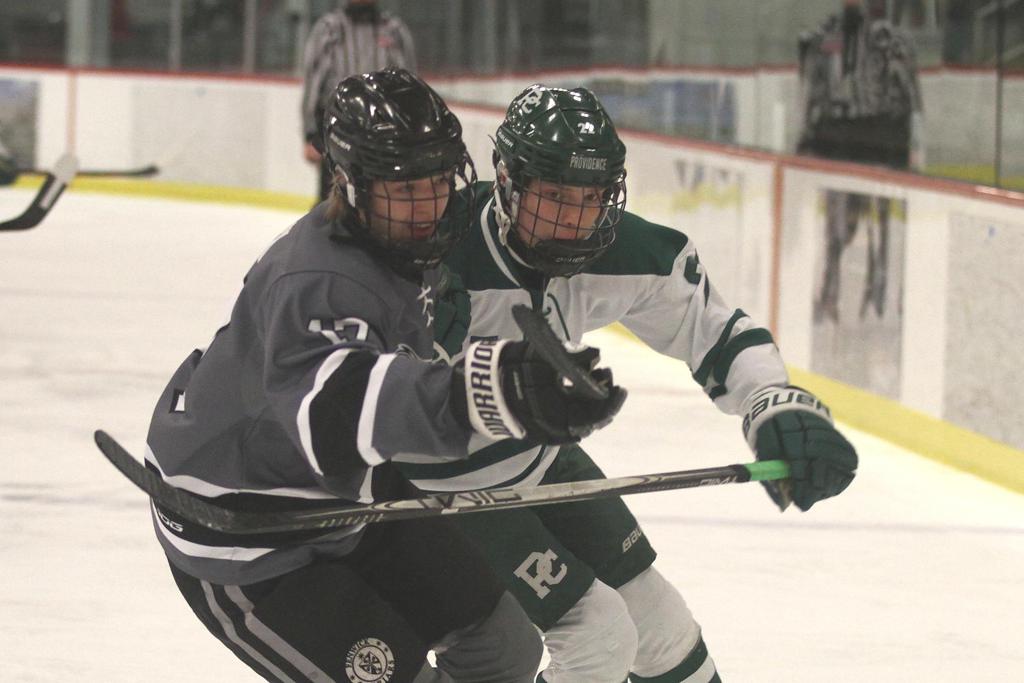