WILLOWBROOK — Notre Dame forward Shane Zeman may be the Dons’ leading scorer this year with 14 goals but Notre Dame coach Matt Leitzke appreciates Zeman for more than his ability to score.

“I can pretty much pick who I want to play with him and they make a difference because Zeman makes guys around him better,” Leitzke said. “As a coach, that’s all you can ask of any player.”

“The goal is to score goals for the team so whoever is out there with me — it can be any of my teammates as long as they’re helping me get room and space, and I get them room and space to finish,” Zeman said.

That approach was on display Monday, as Zeman and his mates put 45 shots on net in Notre Dame’s 3-2 win over host Marist in their CCHL game, with Zeman striking twice and the Dons ultimately getting the game-winning goal from Mario Garcia, mid-way through the third period.

Both the Dons and Redhawks have faced an uphill battle for CCHL wins this season, but Notre Dame got it done on Monday inside the Willowbrook Ice Arena.

“We’ve been close. We lost by a goal to Providence the other night and had a good effort against Brother Rice yesterday,” Leitzke said. “We challenged them to come back with a good effort tonight and they put 45 shots on net, so that was nice to see, and the hockey gods rewarded us with a nice one-goal victory.”

Marist coach Mark Bandzi watched his team take a 1-0 lead on a Liam Dougherty goal, fall behind 2-1, then tie the game on a Domenic Diiulio goal before before Garcia buried a  third-period game-winner for Notre Dame.

“I was really hopeful we were going to be able to pull that one off, but we left a guy open and he beat us to a loose puck,” Bandzi said. “But we batted back to tie it back up and I thought we had momentum going our way. We just came up a little bit short.”

Marist got on the board just four minutes into play, when Dougherty netted his sixth CCHL goal of the year on assists from Riley Jamison and Matt Hansen. Dougherty’s short back-hand on a rebound gave Marist a 1-0 lead at the 13:05 mark.

“Liam probably has the best set of hands on our team,” Bandzi said. “He can really place his shots, and pick corners. He can find the holes to find the back of the net.”

Zeman made it 1-1 at 5:09 by doing some net-crashing of his own, with Seamus Mullaghy and Stephen Adamski getting assists on the play, as the Dons posted a 14-6 edge in shots over the Redhawks in the first period.

One of the tendencies Notre Dame  showed early in the game was the ability to possess the puck — an area the Dons have taken strides in since the season’s start.

“A lot of our guys are new to varsity this year. They get the puck and they want to get rid of it as soon as they get it,” Leitzke said. “So we’ve been challenging five or six of these guys to want to have the puck and be looking to do something with it.

That’s what resulted in a lot more possession tonight and in us getting 45 shots on net.”

Zeman agreed with his coach that the team’s possession game has improved since the season’s start.

Zeman gave Notre Dame a 2-1 lead early in the second period, after he carried a puck along the boards on the right side and went in alone on net and scored at the 14:46 mark. That lead was short-lived, however, as three minutes later Diiulio roofed a shot that capped a breakaway scoring chance at 11:34 to tie the game.

It was Diiulio’s fifth CCHL goal this year, and Dougherty and George Cleary assisted on Diiulio’s game-tying goal.

“Domenic has some speed and he made a really nice move for his goal,” Bandzi said. “At any minute, he can make something happen.”

What followed Diiulio’s goal was roughly 20 minutes of scoreless hockey. Notre Dame held a 27-14 edge in shots after two periods, and found shots from Garcia, Zeman, Griffin Delfosse and Owen Weber late in the second period. Notre Dame goalie Nic Delia also made a fine stop at the 4:40 mark of the second period to keep the game tied.

“Nic played a great game for us tonight in net,” Leitzke said. “He’s been a backstop for us all year, facing 40 shots a game, so he’s in the locker room with a big smile on his face after getting this win.”

Not to be outdone was Marist goalie Lukas McWilliams. The senior shined, particularly in a third period that saw Notre Dame put 18 shots on net.

The 2-2 tie held until Dons forward Michael Johnson fired from deep on the left side, and Garcia was there to bury the rebound at the 8:08 mark.

“Mario is another guy like Zeman — he goes out there and plays his game,” Leitzke said. “It’s a matter of finding another two guys that can play off of that because Mario is a tremendous offensive talent.”

Marist located a few dangerous shots to tie the game down the stretch but Delia and his defense were up to the challenge. Notre Dame continued to pressure to the final buzzer, but McWilliams similarly didn’t budge.

“Lukas faced over forty shots tonight and he’s been our backbone all year,” Bandzi said. “Unfortunately for us, he’s a senior this year.”

Zeman was also ready to pass a few accolades around after the win.

“I thought Mario Garcia brought it, Michael Johnson brings it every night, and Henry Ladewski has been really playing well. He has really elevated his game,” Zeman said. “And Joey (McPartland) has probably blocked ten shots in the past two games.”

GAME NOTES
Notre Dame
Leitzke echoed Zeman’s praise for Ladewski and McPartland after the win.
“Ladewski has been making a big difference for us,” Leitzke said. “He’s been stepping up and has a couple of assists in our last few games. He was a role player that wasn’t getting a lot of minutes but he has really come into his over the last couple of weeks. He has answered the call.”
McPartland has also been answering the call for the Dons, who got a solid night from another source as well.
“McPartland is out there blocking shots, working both corners, and he’s making a big difference for us on the back end,” Leitzke said. “I also thought Alex Shannon, a defenseman, played a good game for us tonight.”
“The penalty kill was big today,” Zeman said. “We were blocking a lot of shots, and not letting pucks get through. And I’m just happy with how we’ve improved as a team. We’re trusting each other now, as teammates, and you could see that out on the ice tonight. We moved the puck to people in the corner because we trusted that they could make plays. We’ve learned to work with each other.”
Marist
A season where wins have been hard to come by can lead to teammates carping at each other in frustration, but the Redhawks have done none of that this season.
“They stay together. They don’t jump on each other, as frustrating at times as it’s been. They hang together as a group,” Bandzi said. “We’ve struggled for wins, for sure, but I think we’ve lost four games in the last twenty seconds of the game.
“When they believe, we do well, and when they doubt themselves we get in trouble.
But our penalty kill has seen a lot of improvement this season. That’s been our bright spot for sure. We killed off (six) penalties tonight and that’s something we’ve taken to heart as a team,” Leitzke said.
Marist went into Monday’s game on the heels of a 5-3 win over Mt. Carmel, on a night that was special to the Redhawks for reasons that surpass hockey wins and losses.
The win over Mt. Carmel came on a night of fundraising by Marist for the Pediatric Brain Tumor Foundation, and the Redhawks raised more than $12,000 for the cause.
They also enjoyed the luxury of having Tinley Park resident Timmy McConnell present for the ceremonial puck drop on a very special night.
“Timmy O’Connell is our Super Fan,” Bandzi said. “He has brain cancer and we’ve been lucky enough to have him around the program for three years now. His personality is larger than life and he just lights up a room. He’s an awesome kid. The guys all love Timmy.
“It’s important for all of our players to get outside themselves and see how much good they can do for people who need it. It was a great night all the way around.” 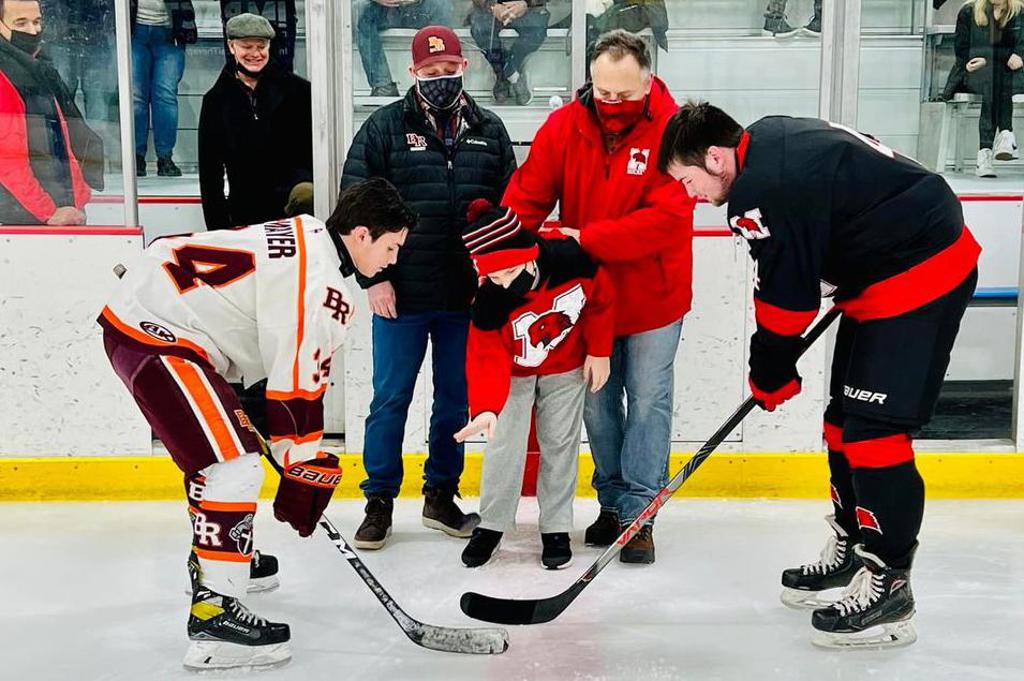 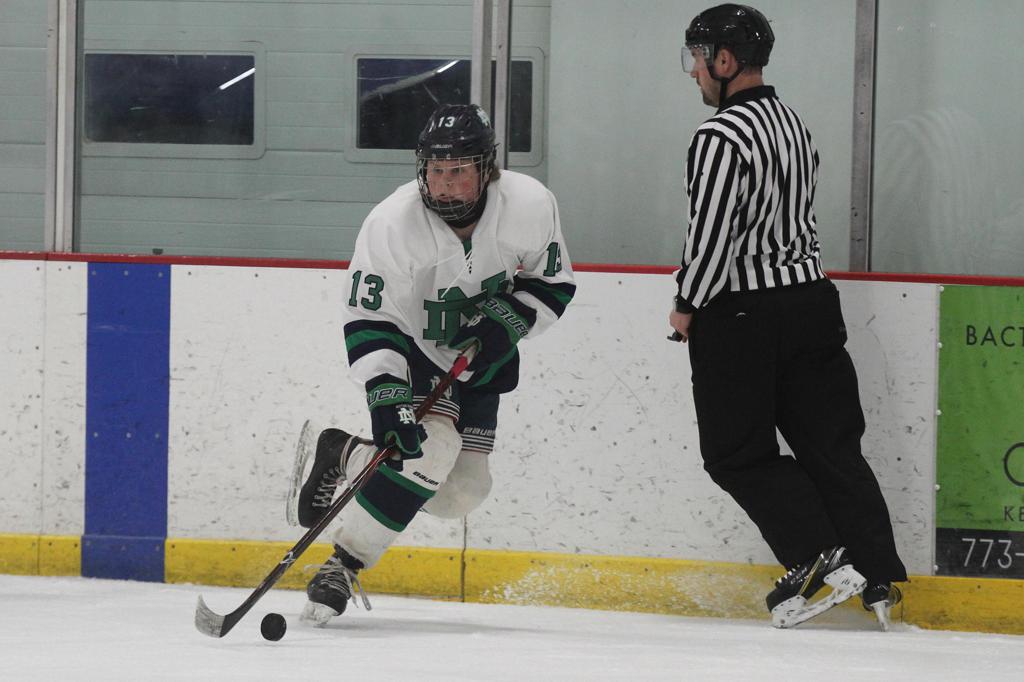 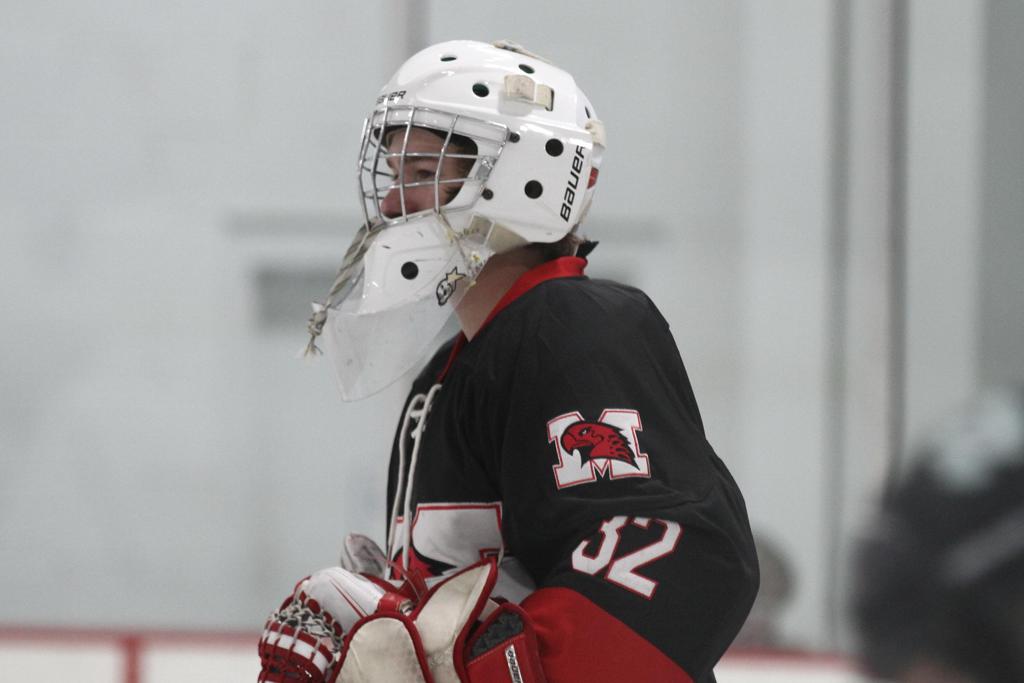 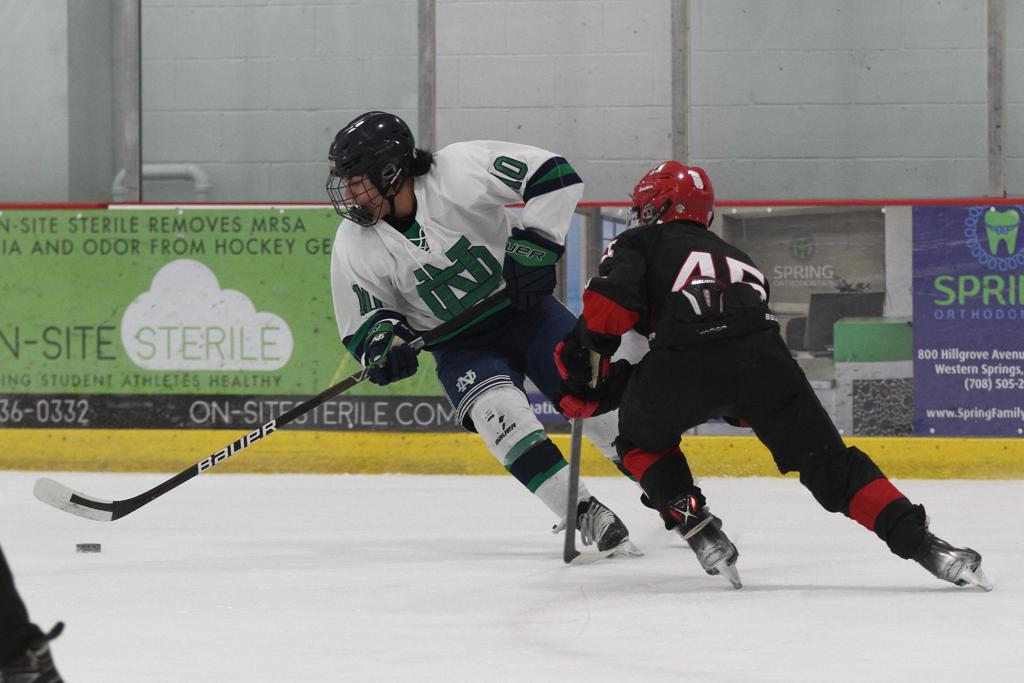 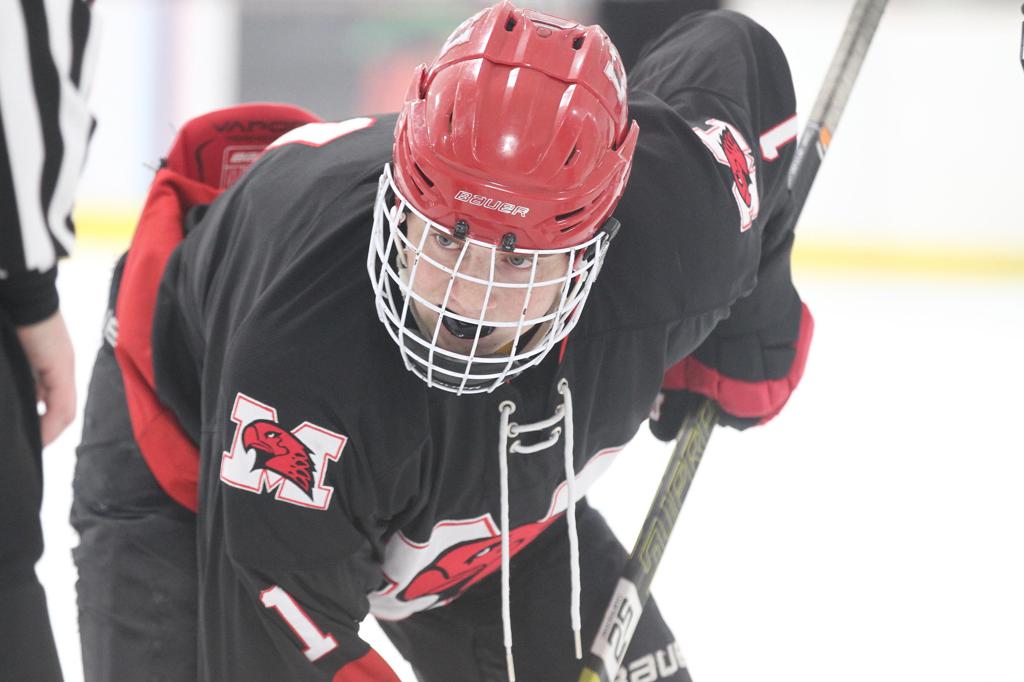 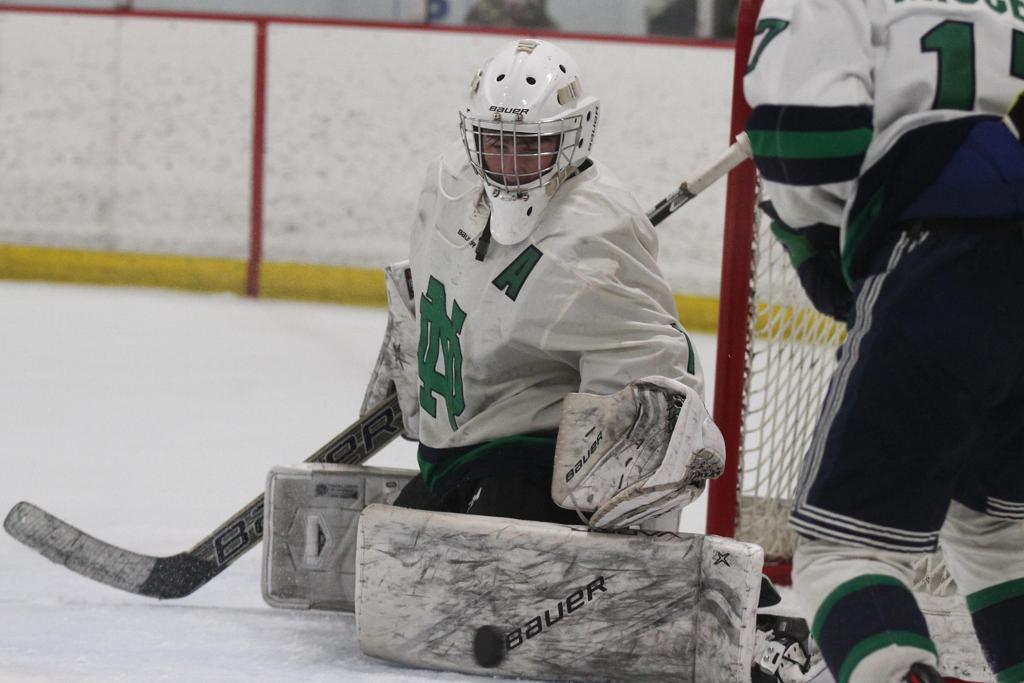 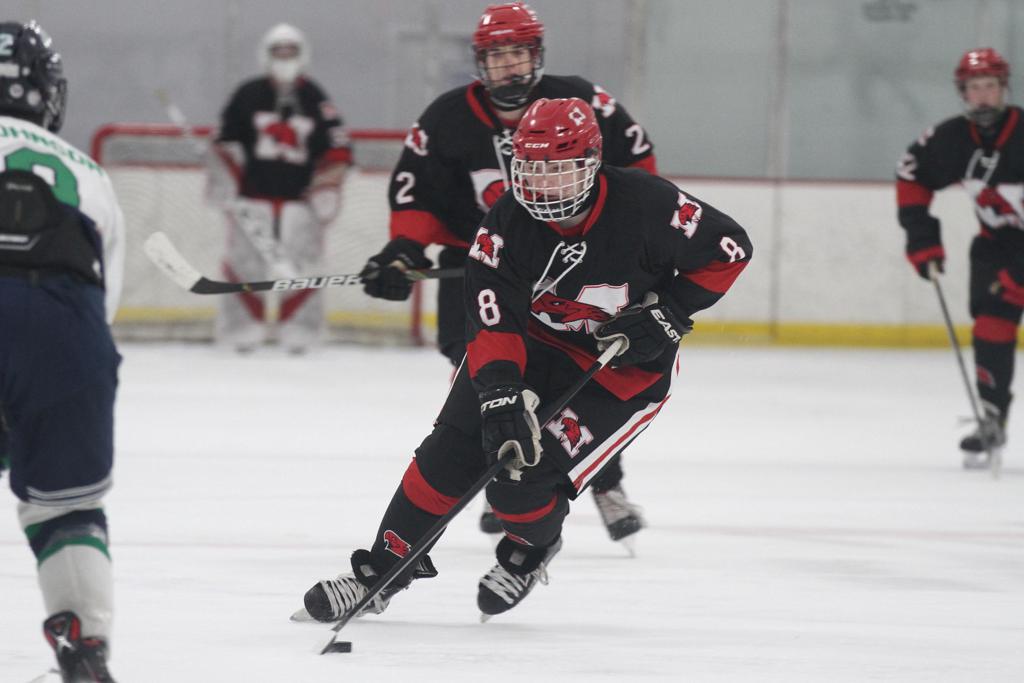 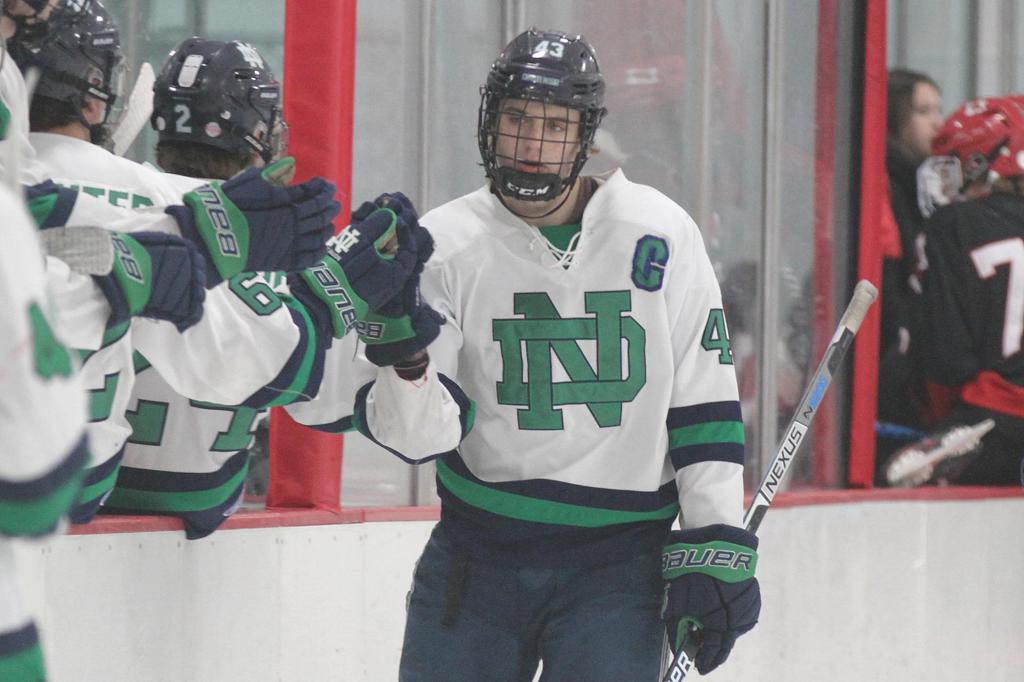 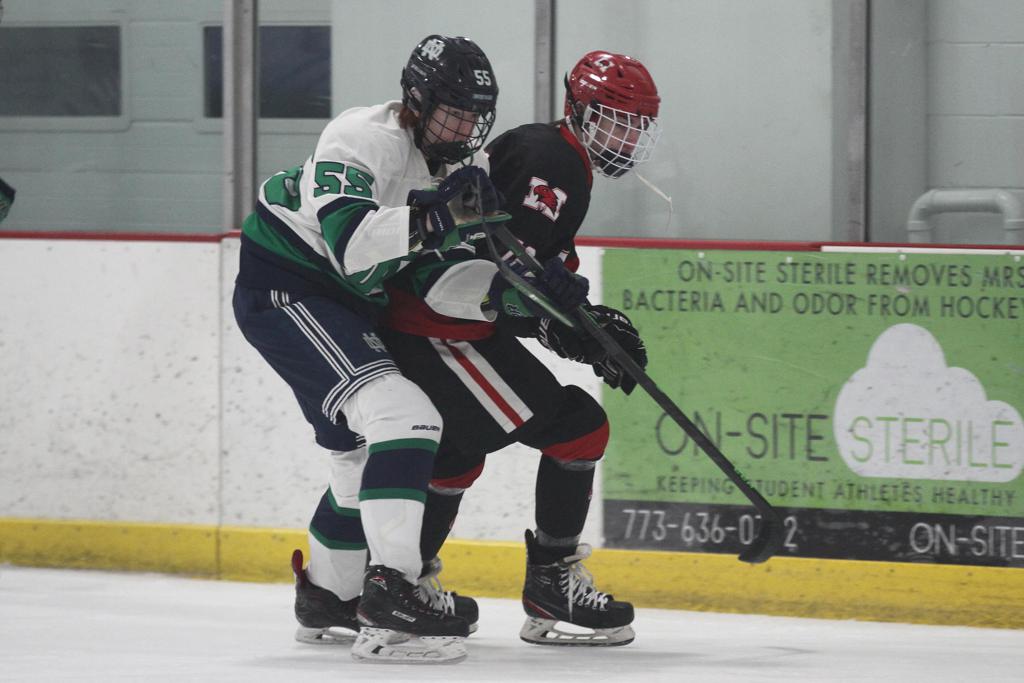