Benet Academy goalie Will Janus ran the gauntlet against Carmel Catholic on Tuesday, making saves that were at turns spectacular, routine, and timely in the Redwings’ 5-2 win over host Carmel.

Janus kept the slate clean in a second period that saw multiple Carmel 5-on-3 power plays. He stopped point-blank scoring chances, and even added a save on a penalty shot to boot.

“That was his best game of the year,” Benet coach Jon Grzbek said of Janus. “He held really firm. The more pucks he sees, the more he’s dialed in, and if you watched him during those penalties he was out there pushing guys out of his way. He was dialed in.”

Benet captain Tommy Budreck’s early-first period goal gave Benet a 1-0 lead but Carmel (10-3-1 in CCHL play) struck twice on goals from Bryce Stensrud and Nolan Herubin to take a 2-1 lead after one period.

Benet (10-1-0) held Carmel scoreless the rest of the way while the Redwings' offense stayed the course; Zandis Hoover and Curtis Sperling scored once each in the second period, and teammates Gabe Szopinski and Hudson Schlie each scored in the third.

And Janus shut the door in the second and third periods.

“Our other goalie, Patrick Sullivan, has been playing really solid too,” Budreck said. “When you have two of the top goalies in the state, you’re able to play with a lot of confidence. We got that (goal) early and they came back and got two, but we’ve been a team with perseverance.”

The two teams last squared off in a 2-1 Benet win on Sept. 11 and the score of Tuesday’s rematch was slightly deceptive. The teams were tied with 27 shots apiece in the third period and it was a one-goal game until Benet struck twice in the final three minutes.

“I thought the game was closer than the final (5-2) score. We had a ton of chances and just couldn’t finish on a goal,” Carmel’s Herubin said. “It was back-and-forth. They went on a run early, then we went on a run.”

Benet ultimately closed with a 37-31 edge in shots by the final buzzer.

An active first period saw Benet strike first at 15:12, when Budreck buried his 10th CCHL goal of the year with a wrist shot from the right side on a feed from Sperling. Carmel goalie Dylan Lloyd saved a Budreck shot two minutes later, then saved on Budreck again near the 12-minute mark.

Janus was the player of the game, but Lloyd stood tall in net as well on Tuesday..

“I thought (Lloyd) played really well,” Carmel coach Paul Eberhardt said. “Their goalie played well because we had some really good chances and just couldn’t get them in. We couldn’t cash in on them.”

The momentum Benet enjoyed to start the game turned in Carmel’s favor mid-way through the first period. After Janus stopped a pair of Herubin shots to the 8-minute mark, Stensrud scored his 5th CCHL goal of the season at 7:12 to tie the game.

Stensrud crashed the net and buried a rebound shot in a crowd, with teammates Ryan Capulong and Andrew Munro earning assists on the goal. Just 54 seconds later, Herubin gave Carmel a 2-1 lead with his 16th CCHL goal, on an assist from Stensrud.

“Stens and Nolan find each other and they complement each other extremely well,” Eberhardt said. “I haven’t figured out if we’re better when they’re together or when they’re on different lines. And today, we only had three lines.”

Benet was shorthanded due to ACT testing when the teams met in September, and it was Carmel missing some key contributors for the rematch. Five Corsairs were absent from Eberhardt’s Tuesday lineup for assorted reasons.

The final six minutes of the first period saw Lloyd stop a pair of Szopinski shots, and Janus gloved shots taken from the point by Carmel’s Kyler Gornick and Charlie Lenihan.

That Benet survived a penalty-plagued second period without giving up a goal was a nearly magical feat. A flock of Redwings landed together on the bench in the period, and Carmel had two 5-on-3 power plays for short stints in the period.

But the Corsairs just couldn’t get a puck past Janus. The final minute of the second period helped put an exclamation point on Janus’ fine day in net.

First, Janus made a save on a shot taken from point-blank range by Carmel’s Jacob Dankelson. With 32 seconds remaining in the period, Janus then turned away a penalty shot awarded to Herubin after he was taken down from behind on a breakaway.

“I saw (Herubin) coming down and when shooters slow down they usually curl towards the middle, and that’s when you’re expecting a shot,” Janus said. “I just sort of assumed the shot was coming and I was ready for it. I was ready for anything tonight.

“When you’ve got a good team in front of you like ours, it’s only occasional that you’ll get a game where you’ll get many shots.”

After Benet withstood Carmel’s six power plays in the second period, the Redwings’ perseverance paid off. First, Hoover scored unassisted after teammate Ryan Farago forced a turnover to tie the game at 2-2 with 2:32 remaining.

Benet took a 3-2 lead when Sperling scored at 2:04 on assists from Briac Griffin and Schlie.

Janus saved a John Harrop shot early in the third period, and Lloyd stopped Budreck with roughly 11 minutes left to play. Janus gloved a Gornick shot and turned away shots from Herubin and Stensrud to the seven-minute mark.

Janus and Lloyd took turns stopping point-blank shots, 30 seconds apart, with roughly five minutes remaining. Then, just as the Redwings had done to end the second period, they scored twice in the waning minutes of the third to put the game away.  Szopinski scored on a Farago assist at 2:56, and Schlie finished the day’s scoring at 2:05 on an assist from Christiano DiBenedetto.

“Cole Rosenthal’s line was my first line and all three periods they started out with pucks deep in their zone and putting pressure on, along with (Curtis) Sperling and (Brandan) O’Neill,” Grzbek said. “That was a good line tonight.”

The Redwings’ captain was clear on what he most appreciated from his side on Tuesday.

“We weren’t going to give up," Budreck said." We went down 2-1 but I knew we had a lot of fight left. We’re a team based on that (fight), just like we were last year. It was a good building block to start the new year and we’ve got a lot of games coming up, so we’re fired up.”

Carmel defenseman Leon Swiatkowski had a similarly positive opinion of his team’s play despite the loss.

“We battled hard and with a short bench I thought we came together as a team,” Swiatkowski said. “We had some ups and downs and we still kind of battled through it. We played well, looking back-door, and making good passes, and (Janus) just played really good. The game could have gone either way, with a couple bounces here or there.”

GAME NOTES:
Carmel
With three players missing due to shoulder injuries and five total players absent for Tuesday’s game, Eberhardt had to call for reinforcements before the puck dropped.
“Ryan Capulong and Aidan Gammel were the two jayvee call-ups and they both played hard and gave us valuable minutes,” Eberhardt said.
Carmel’s skipper also appreciated the work put forth by defensemen Gornick and Swiatkowski and was anything but disappointed in his side’s effort despite the loss.
“It was a good hockey game and I’m proud of the guys,” Eberhardt said. “We had a slow start and we found a way to get back in it. We played hard and I really have no complaints.”
Benet
Grzbek also had accolades ready for a couple of his defensemen after the win.
“Briac Griffin is a forward but I coached him as a pee-wee when he was a defenseman,” Grzbek said. “We’ve had so many injuries that I’ve had to move him back and he played great. I thought (Ethan) Heller on the defensive side was really good as well. He got a tough penalty and came back and played a good third period.”
Budreck assessed where his Redwings have improved since the season’s start, and left the rink in Vernon Hills happy with the way they played.
“Our breakouts have improved for sure,” Budreck said. “Early in the year we were just ringing it around. We did that a little today but we were also able to make some crisp passes. Our forecheck  has been much improved and our goaltending has been really good.
“We knew (Herubin and Stensrud) were two of their top guys, and they scored their two goals tonight. But then we were able to lock them down, Janus stood on his head, and we were able to get the win.” 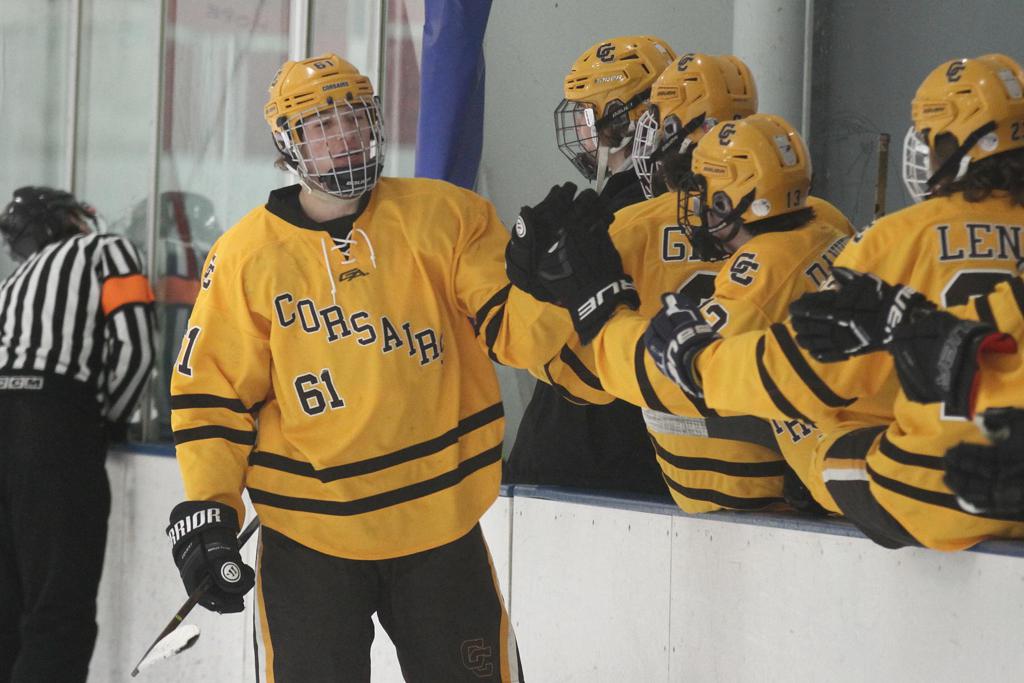 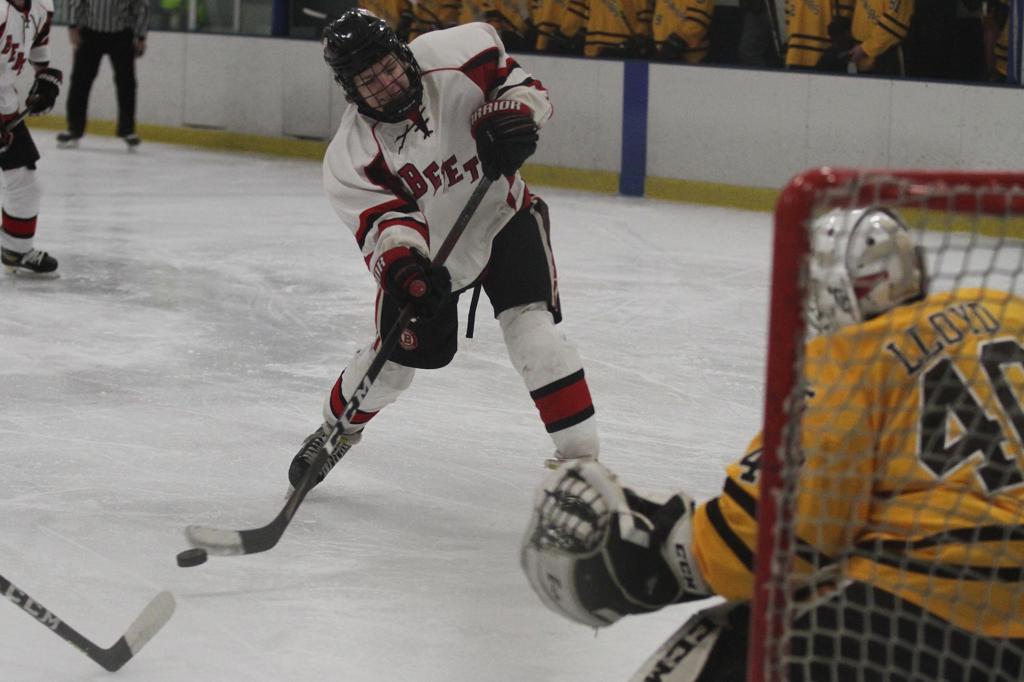 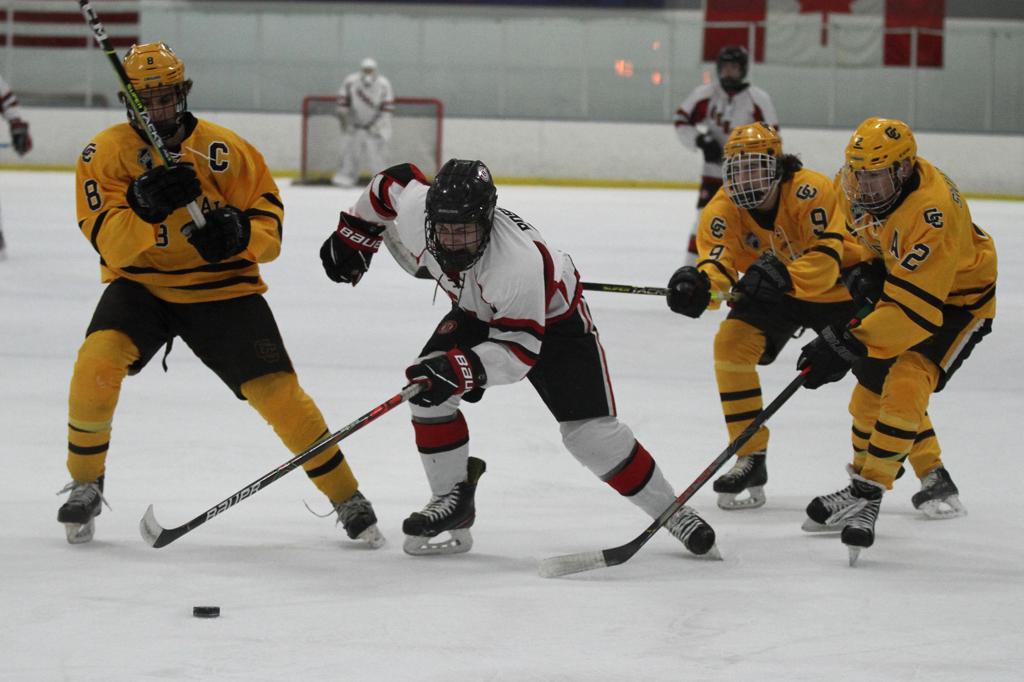 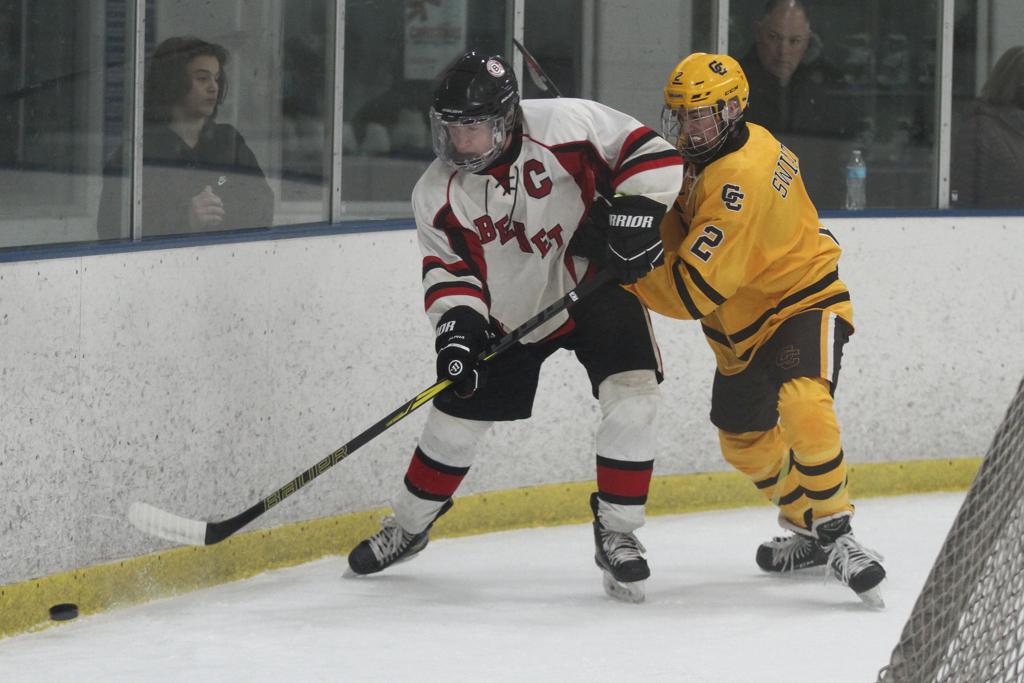 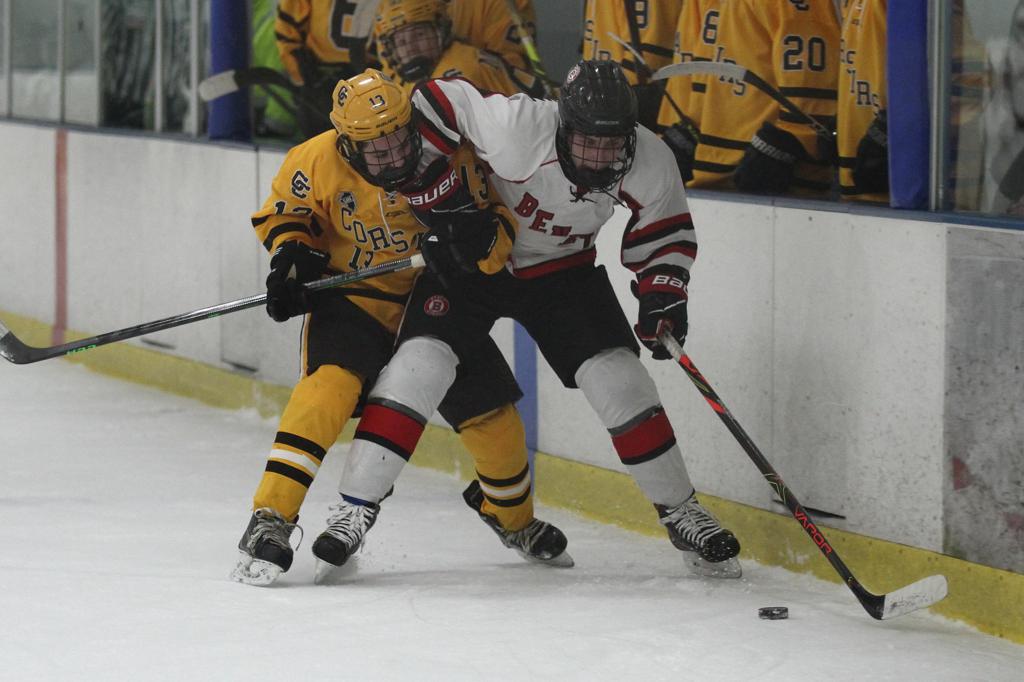 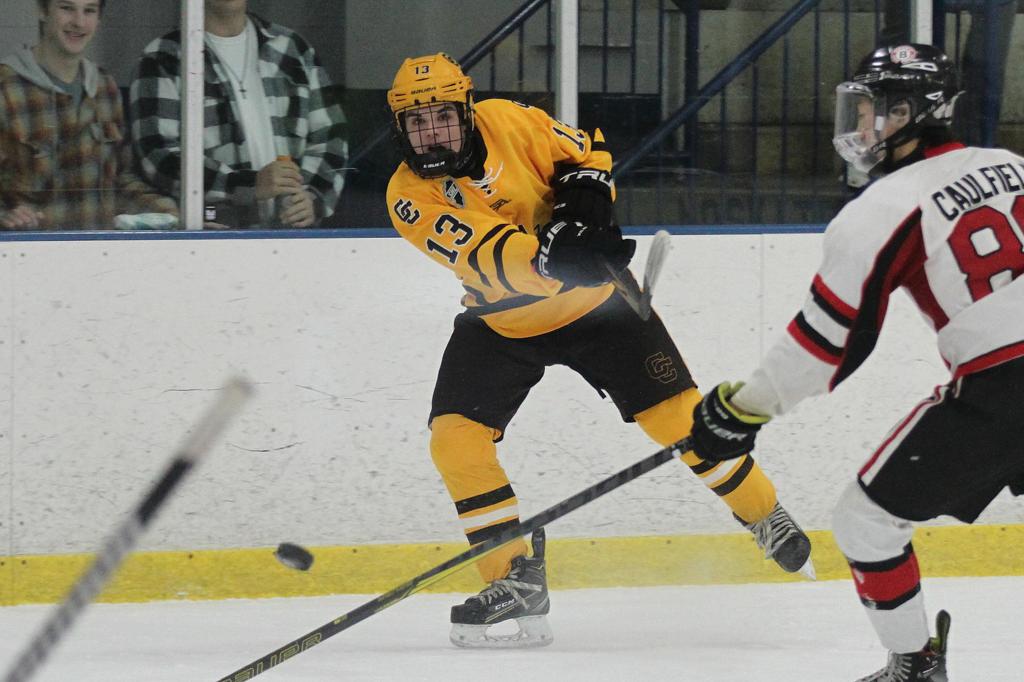 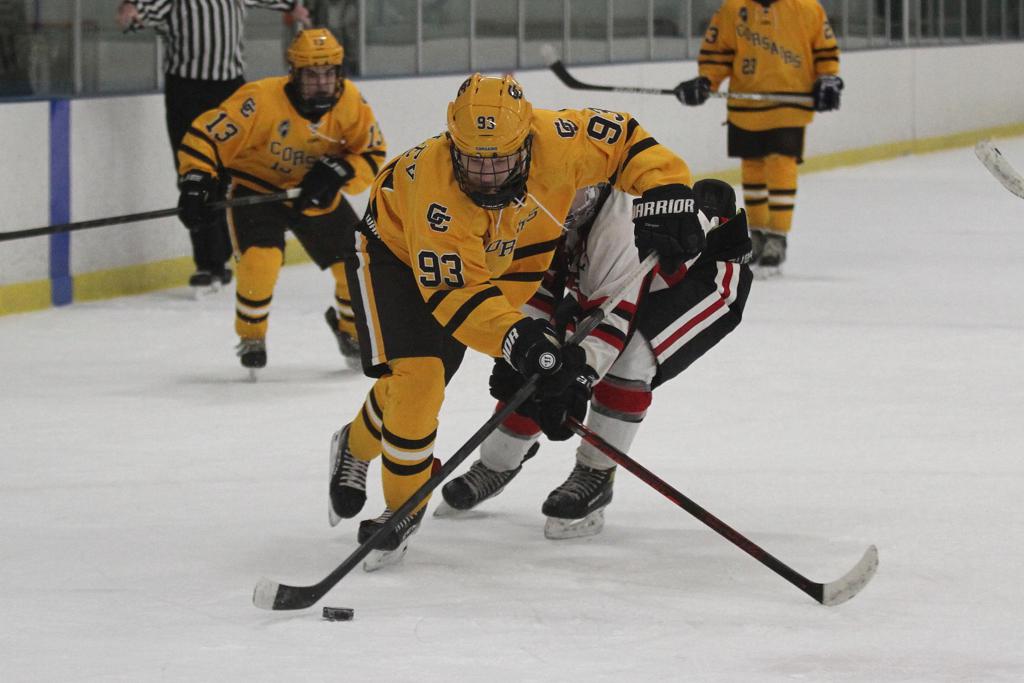 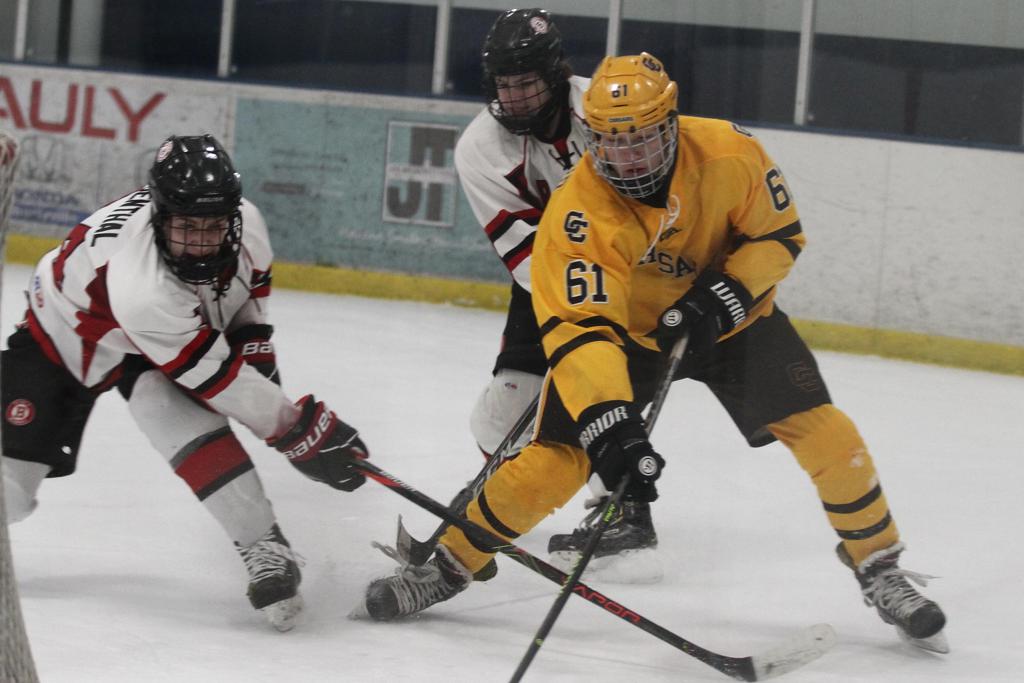 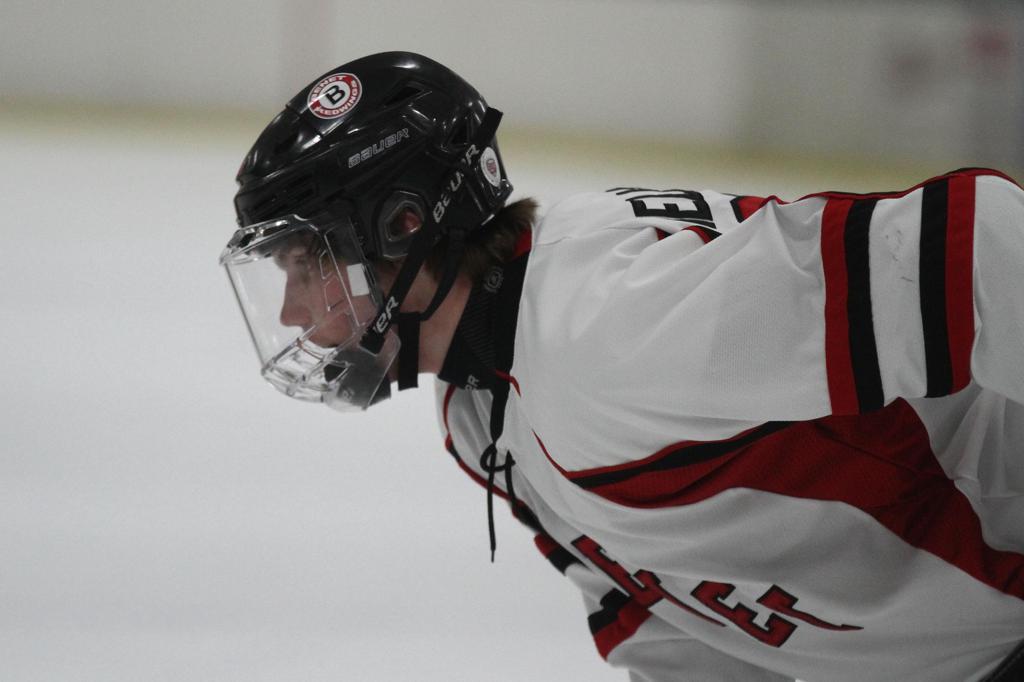 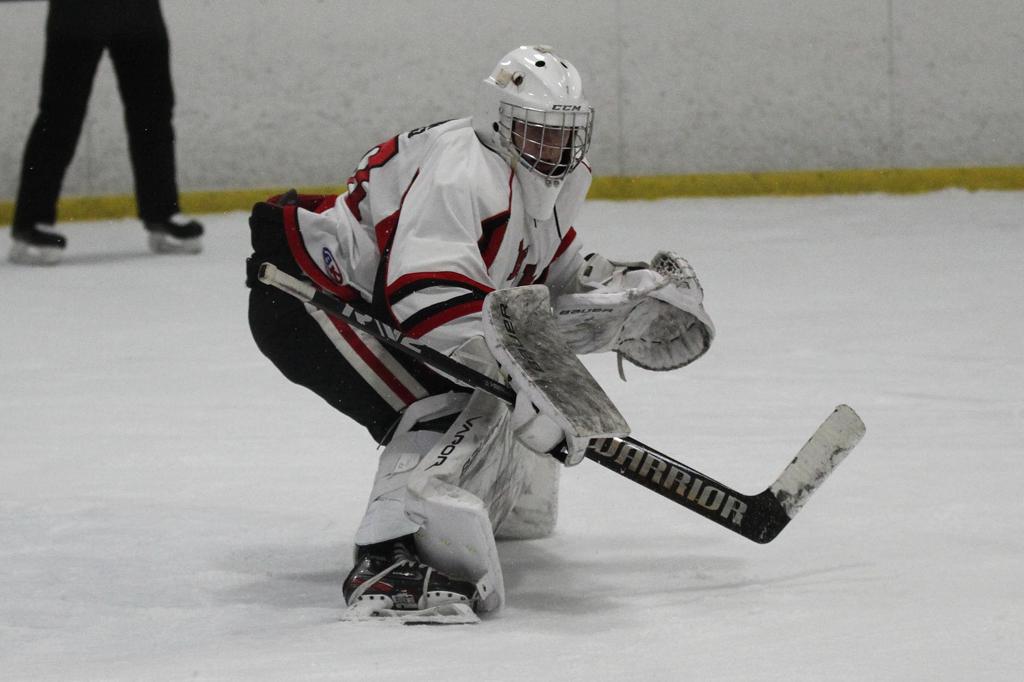 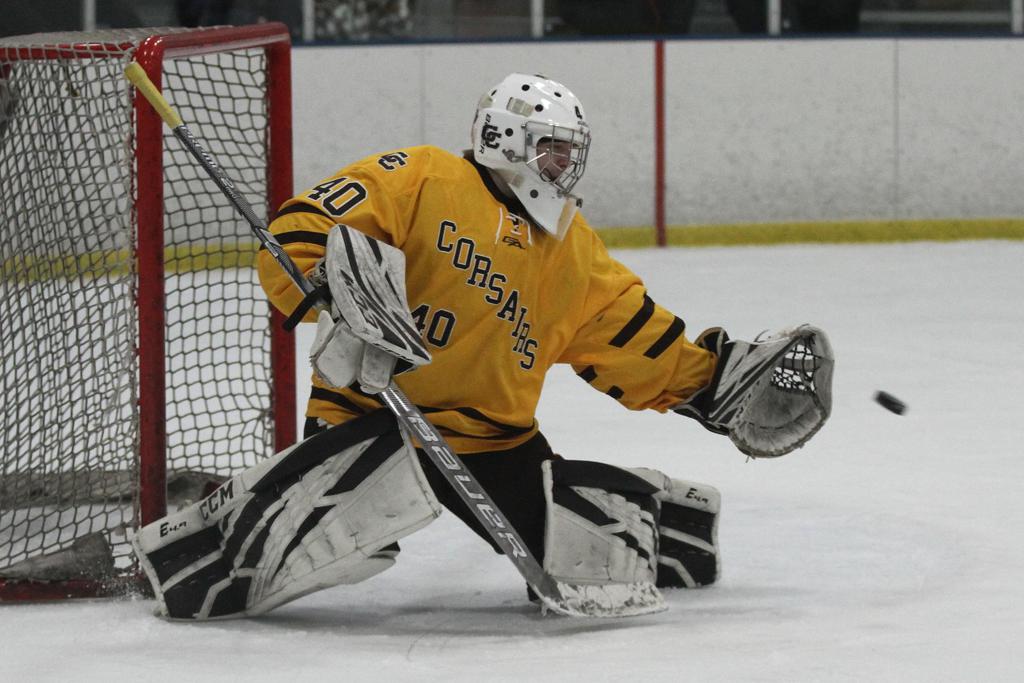 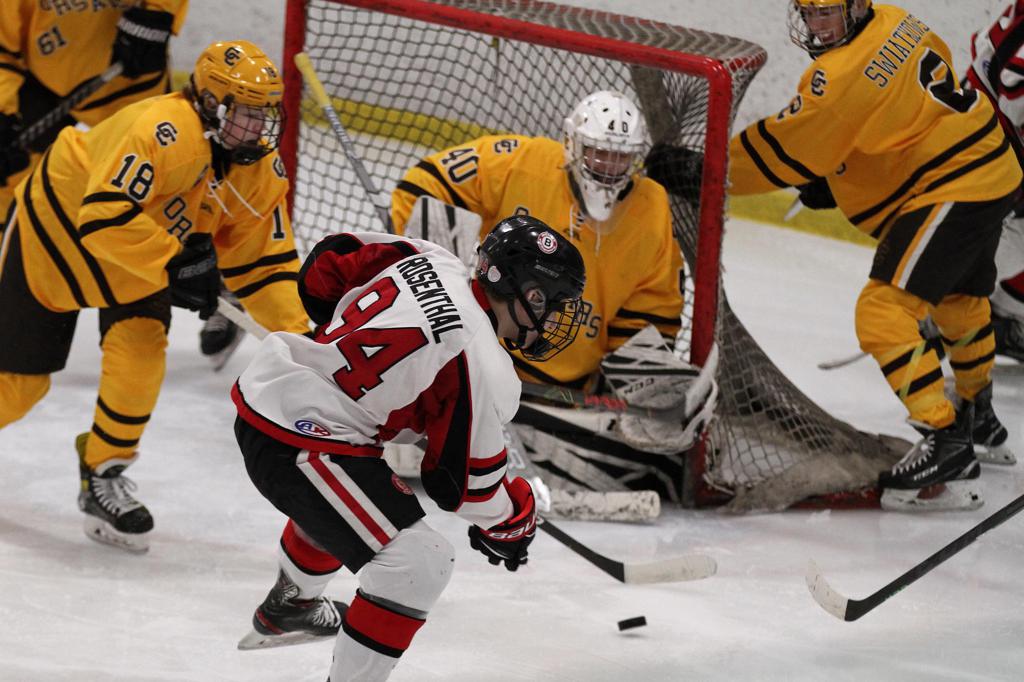 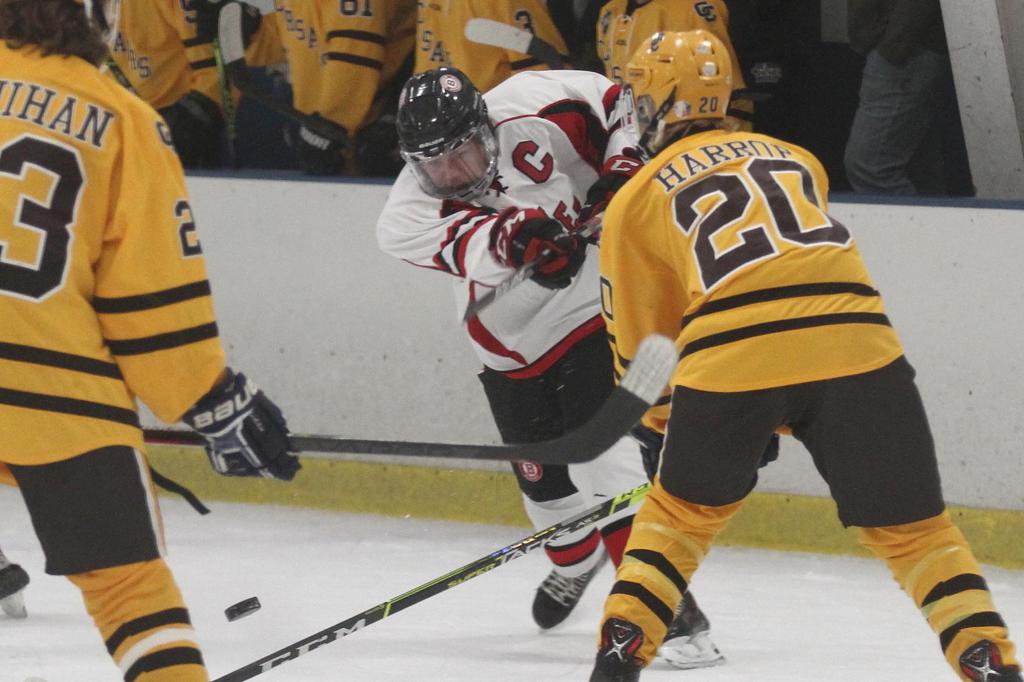